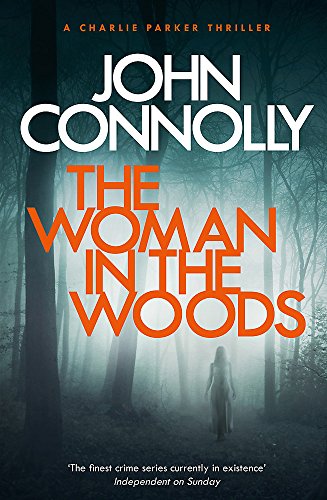 The Woman in the Woods
by John Connolly

The Woman in the Woods Summary

The Woman in the Woods: A Charlie Parker Thriller: 16. From the No. 1 Bestselling Author of A Game of Ghosts by John Connolly

It is spring, and the semi-preserved body of a young Jewish woman is discovered buried in the Maine woods. It is clear that she gave birth shortly before her death.

Private detective Charlie Parker is engaged by the lawyer Moxie Castin to shadow the police investigation and find the infant, but Parker is not the only searcher. Someone else is following the trail left by the woman, someone with an interest in more than a missing child, someone prepared to leave bodies in his wake.

And in a house by the woods, a toy telephone begins to ring.

For a young boy is about to receive a call from a dead woman . . .

The Woman in the Woods Reviews

A supernatural element has long been present in John Connolly's excellent Charlie Parker series. The 16th title, The Woman in the Woods is no exception . . . Beautifully written, with a complex plot and a large cast of richly drawn characters, this is Connolly at his sinister best -- Laura Wilson * Guardian *
Connolly writes beautifully and has once again woven a riveting yet disturbing tale * Daily Express *
Keeps the reader enthralled from the very beginning . . . "on the edge of your seat" stuff . . . another triumph for Mr Connolly. * Shots magazine *
Every character is expertly drawn . . . A complicated plot, richly drawn characters, and a vein of horror will keep readers devouring the pages. * Kirkus Reviews *
Connolly's writing is as impeccable as ever, and, typical of the series, he layers on supernatural elements . . . without compromising the real-world feel of the story . . . Another winner in a consistently high-quality series * Booklist *
Connolly portrays a chilling humanity in his characters, both good and evil, giving the book depth while keeping the reader unsettled to the end. Another great addition to a popular series that will please its many fans * Library Journal *
Unnerving and moving . . . This is Connolly's masterpiece * Publishers Weekly *
One of crime fiction's most accomplished contemporary series . . . John Connolly has . . . outdone himself with this book's gorgeously-drawn multi-dimensional villains . . . The series has increasingly strolled into the shadowy world of the supernatural and there are several scenes in this book which nudge it beyond "thriller" and into more typical "horror" territory. They're delicately balanced on the edge of unsettling * MurderMayhemandMore, wordpress.com *
Sixteen books into the Charlie Parker series and Connolly continues to deliver with his unique blend of supernatural, horror and crime fiction wrapped into one explosive package . . . As the layers are peeled back in this complex mystery, each new chapter hits you like a sucker punch. This haunting thriller will keep you reading into the night with the lights on and the phone turned off * RT Book Reviews *

John Connolly is author of the Charlie Parker mysteries, The Book of Lost Things, the Samuel Johnson novels for young adults and, with his partner, Jennifer Ridyard, co-author of the Chronicles of the Invaders. John Connolly's debut - EVERY DEAD THING - introduced the character of Private Investigator Charlie Parker, and swiftly launched him right into the front rank of thriller writers. All his subsequent novels have been Sunday Times bestsellers. He was the winner of the 2016 CWA Short Story Dagger for On the Anatomization of an Unknown Man (1637) by Frans Mier from NIGHT MUSIC: Nocturnes Vol 2.

In 2007 he was awarded the Irish Post Award for Literature. He was the first non-American writer to win the US Shamus award and the first Irish writer to win an Edgar award. BOOKS TO DIE FOR, which he edited with Declan Burke, was the winner of the 2013 Anthony, Agatha and Macavity awards for Best Non-Fiction work.

GOR009283683
The Woman in the Woods: A Charlie Parker Thriller: 16. From the No. 1 Bestselling Author of A Game of Ghosts by John Connolly
John Connolly
Charlie Parker Thriller
Used - Very Good
Paperback
Unknown
0
1473641934
9781473641938
N/A
Book picture is for illustrative purposes only, actual binding, cover or edition may vary.
This is a used book - there is no escaping the fact it has been read by someone else and it will show signs of wear and previous use. Overall we expect it to be in very good condition, but if you are not entirely satisfied please get in touch with us.