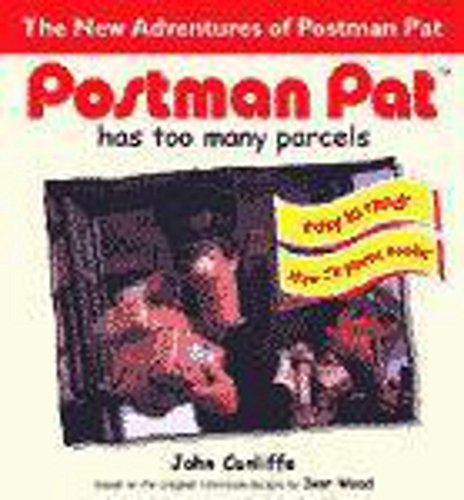 Postman Pat Has Too Many Parcels
by John Cunliffe

Postman Pat Has Too Many Parcels Summary

Postman Pat Has Too Many Parcels by John Cunliffe

Postman Pat has too many parcels to deliver. Ted Glen tries to help by building Pat a high-speed postal scooter, but things go from bad to worse as Pat causes havoc in Greendale.

Luckily for Pat, Mrs Goggins comes to the rescue and saves the day!

Postman Pat Has Too Many Parcels Reviews

They make great bedtime stories for pre-school children and have easy-to-read storylines. What sets the books apart, however, is the great photos of Pat, Jess and pals. Great value. * OK magazine, 30th March 2001 *

John Cunliffe has been involved with children's books as a parent, reader, reviewer, librarian, teacher and author for most of his life. He was a librarian for over thirty years, including two years as British Council Librarian in Yugoslavia. John then moved on to teaching, and eventually became an Advisory Teacher on educational computing. He has had over 200 books published since 1964 and in 1988 began to write full-time. He has written extensively for television, and also presented fifty episodes of "Rosie and Jim", as well as broadcasting on local radio and television for many years.

GOR003127503
Postman Pat Has Too Many Parcels by John Cunliffe
John Cunliffe
Postman Pat
Used - Good
Paperback
Hachette Children's Group
2000-09-21
16
0340785071
9780340785072
N/A
Book picture is for illustrative purposes only, actual binding, cover or edition may vary.
This is a used book - there is no escaping the fact it has been read by someone else and it will show signs of wear and previous use. Overall we expect it to be in very good condition, but if you are not entirely satisfied please get in touch with us.