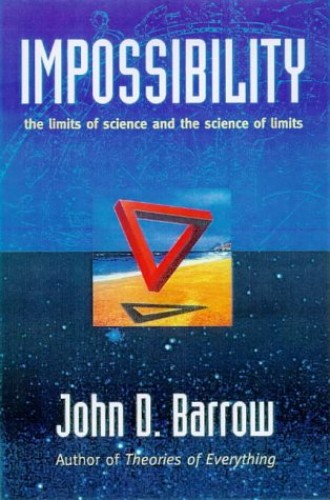 In Stock
$10.99
+10% GST
What can we never do? The end of each century leads to a stocktaking of human achievement and our expectations about the future. This book looks at what limits there might be to human discovery and what we might find, ultimately, to be unknowable, undoable, or unthinkable.
Very Good Good
Only 4 left

Impossibility: The Limits of Science and the Science of Limits by John D. Barrow

What can we never do? The end of each century leads to a stocktaking of human achievement and our expectations about the future. This work looks at what limits there might be to human discovery and what we might find, ultimately, to be unknowable, undoable, or unthinkable. Science is a big success story, but where will it end? And indeed, will it end? Weaving together a tapestry of surprises, Barrow explores the frontiers of knowledge. We find that the notion of "impossibility" has played a striking role in our thinking. Surrealism, impossible figures, time travel, paradoxes of logic and perspective, theological speculations about Beings for whom nothing is impossible - all stimulate us to contemplate something more than what is. Why should we find anything impossible? We explore the limits that may be imposed upon a full understanding of the physical Universe by limits of technology, computers, cost, and complexity. We ask why it is that the process of biological evolution should have equipped us to understand the deep structure of the Universe. We see how the Universe's structure prevents us from answering the deepest questions about its beginning, its structure, and its future. And finally, we delve into the deep limits imposed by the nature of knowledge itself. These deep limits have profound implications for any quest for complete knowledge. They take us into the debates over the problems of free will and consciousness. Godel's famous theorem about our inability to capture the truths of mathematics by rules and axioms is explored to see if it has any implications for science. Using simple explanations, the text demonstrates that impossibility is a deep and powerful notion; that any Universe complex enough to contain conscious beings will contain limits on what those beings can know about their Universe; that what we cannot know defines reality as surely as what we can know. Impossibility is a two-edged sword: it threatens the completeness of the scientific enterprise yet without it there would be no laws of Nature, no science, and no scientists.

John Barrow is Professor of Astronomy at the University of Sussex. Among his many popular books on science are Pi in the Sky, Theories of Everything, and The Origin of the Universe. He lives in Sussex, England

GOR002005074
Impossibility: The Limits of Science and the Science of Limits by John D. Barrow
John D. Barrow
Used - Very Good
Hardback
Oxford University Press
1998-05-01
291
0198518900
9780198518907
N/A
Book picture is for illustrative purposes only, actual binding, cover or edition may vary.
This is a used book - there is no escaping the fact it has been read by someone else and it will show signs of wear and previous use. Overall we expect it to be in very good condition, but if you are not entirely satisfied please get in touch with us.