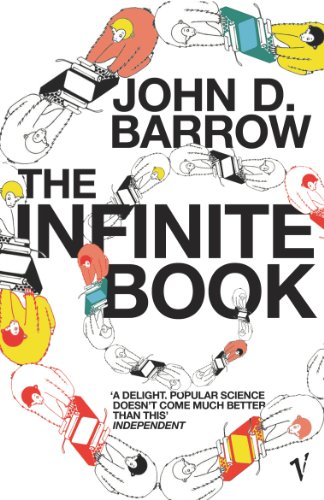 The Infinite Book
by John Barrow

Out of Stock
$14.49
inc. GST
Popular science doesn't come much better than this' IndependentEverything you might want to know about infinity - in history and all the way to today's cutting-edge science.
Very Good
Only 0 left

The Infinite Book: A Short Guide to the Boundless, Timeless and Endless by John Barrow

`A delight. Popular science doesn't come much better than this' Independent Everything you might want to know about infinity - in history and all the way to today's cutting-edge science. Infinity is surely the strangest idea that humans have ever had. Where did it come from and what is it telling us about our Universe? Can there actually be infinities? Can you do an infinite number of things in a finite amount of time? Is the Universe infinite? Infinity is also the place where things happen that don't. What is it like to live in a Universe where nothing is original, where you can live forever, where anything that can be done, is done, over and over again? These are some of the deep questions that the idea of the infinite pushes us to ask. Throughout history, the infinite has been a dangerous concept. Many have lost their lives, their careers, or their freedom for talking about it. The Infinite Book will take you on a tour of these dangerous questions and the strange answers that scientists, mathematicians, philosophers and theologians have come up with to deal with its threats to our sanity.

"A delight. Popular science doesn't come much better than this" * Independent *
"Barrow brings his charm and wit to provide an account that is highly engaging" * Nature *
"Science writing at its best. A cutting-edge scientist and a proven writer tackles a subject of infinite fascination. As page-turning as a detective story" * Good Book Guide *
"If you enjoy a good intellectual wrestle, this book is for you" * Daily Mail *

John D. Barrow is Professor of Mathematical Sciences and Director of the Millennium Mathematics Project at Cambridge University, Fellow of Clare Hall, Cambridge, a Fellow of the Royal Society, and the current Gresham Professor of Geometry at Gresham College, London. His principal area of scientific research is cosmology, and he is the author of many highly acclaimed books about the nature and significance of modern developments in physics, astronomy, and mathematics, including The Origin of the Universe, The Universe that Discovered Itself; The Book of Nothing, The Constants of Nature, The Infinite Book: a Short Guide to the Boundless, Timeless and Endless, The Artful Universe Expanded, New Theories of Everything, Cosmic Imagery and, most recently, The Book of Universes.

GOR001108108
The Infinite Book: A Short Guide to the Boundless, Timeless and Endless by John Barrow
John Barrow
Used - Very Good
Paperback
Vintage Publishing
2005-11-03
352
0099443724
9780099443728
Winner of Templeton Prize 2006
Book picture is for illustrative purposes only, actual binding, cover or edition may vary.
This is a used book - there is no escaping the fact it has been read by someone else and it will show signs of wear and previous use. Overall we expect it to be in very good condition, but if you are not entirely satisfied please get in touch with us.