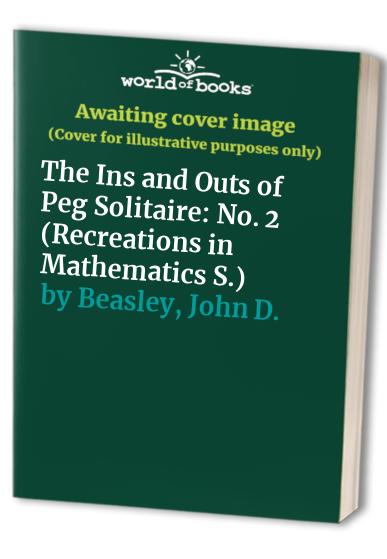 The Ins and Outs of Peg Solitaire
by John D. Beasley

Out of Stock
$14.49
+10% GST
A guide to the puzzle game Solitaire examining the history of the game and showing how to play it. It demonstrates that Solitaire not only provides a series of problems for puzzle enthusiasts but also has an underlying theory interesting for mathematicians. Over 200 problems are included.
Very Good
Only 0 left

The Ins and Outs of Peg Solitaire Summary

The Ins and Outs of Peg Solitaire by John D. Beasley

For mathematical game enthusiasts, the 33-hole Peg Solitaire board presents many intriguing and difficult problems, far more fascinating than the simple problems set out in manufacturers' instructions, and behind these problems lies interesting mathematical theory. Beasley, an internationally known expert on Peg Solitaire, surveys the history of the game, shows how to play it simply and well, explains the theory behind it, and offers over 200 problems and their solutions in over 550 diagrams. Mathematical game fans aged twelve and over will find hours of enjoyment in this book.

About the Author
John Beasley is a freelance computing expert who has studied Peg Solitaire since 1960 and made many original discoveries about the game. He has also composed and published over fifty chess problems and endgame studies, and represented Great Britain in two World Chess Solving Championships in 1977 and 1978.

GOR003211405
The Ins and Outs of Peg Solitaire by John D. Beasley
John D. Beasley
Recreations in Mathematics S.
Used - Very Good
Paperback
Oxford University Press
1992-05-21
287
019286145X
9780192861450
N/A
Book picture is for illustrative purposes only, actual binding, cover or edition may vary.
This is a used book - there is no escaping the fact it has been read by someone else and it will show signs of wear and previous use. Overall we expect it to be in very good condition, but if you are not entirely satisfied please get in touch with us.