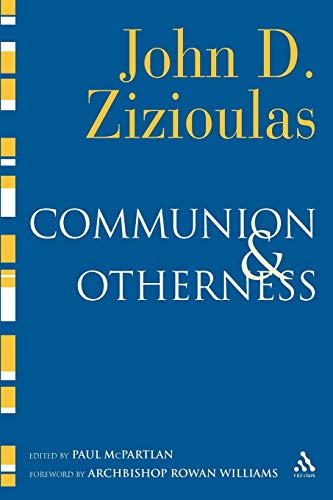 In Stock
$85.99
+10% GST
Communion and otherness: how can these be reconciled? This work seeks to answer the question. It probes the Christian tradition and highlights the existential concerns that already underlay the writings of the Greek fathers and the definitions of the early ecumenical councils.
Well Read
Only 1 left

Communion and Otherness: Further Studies in Personhood and the Church by John D. Zizioulas

Communion and otherness: how can these be reconciled? In this wide-ranging study, the distinguished Orthodox theologian, Metropolitan John (Zizioulas) of Pergamon, seeks to answer that question. In his celebrated book, Being as Communion (1985), he emphasised the importance of communion for life and for unity. In this important companion volume he now explores the complementary fact that communion is the basis for true otherness and identity. With a constant awareness of the deepest existential questions of today, Metropolitan John probes the Christian tradition and highlights the existential concerns that already underlay the writings of the Greek fathers and the definitions of the early ecumenical councils. In a vigorous and challenging way, he defends the freedom to be other as an intrinsic characteristic of personhood, fulfilled only in communion. After a major opening chapter on the ontology of otherness, written specially for this volume, the theme is systematically developed with reference to the Trinity, Christology, anthropology and ecclesiology. Another new chapter defends the idea that the Father is cause of the Trinity, as taught by the Cappadocian fathers, and replies to criticisms of this view. The final chapter responds to the customary separation of ecclesiology from mysticism and strongly favours a mystical understanding of the body of Christ as a whole. Other papers, previously published but some not easily obtainable, are all revised for their inclusion here. This is a further contribution to dialogue on some of the most vital issues for theology and the Church from one of the leading figures in modern ecumenism.

"John Zizioulas, one of the most prominent contemporary Orthodox theologians, continues to develop his understanding of the relation between personhood and communion in eight essays, three published here for the first time. His thesis is that perfect union does not destroy but rather affirms otherness in the triune God, in the relationship between God and human persons and among the members of the Church...A 'must have' for personal and institutional libraries, this book should be used primarily in graduate studies. Zizioulas demonstrates that he is among the first-ranked contemporary theologians and that Orthodox theology is at a time of development influenced by its return to biblical, patristic, and liturgical sources, in a constructive encounter with other Christian theologies, contemporary philosophy, and modern society." -Radu Bordeianu, Horizons, Vol. 34, No. 2, Fall 2007
--Sanford Lakoff
'I'm now reading what I take to be the best book written by an Orthodox theologian in the last 20 years...John Zizioulas' Communion and Otherness is a masterpiece that is not only beautifully Eastern, but philosophically erudite and which engages meaningfully with Western theology. Herein Zizioulas further develops, refines, and defends his relational ontology of personhood that he first put forth in Being as Communion.'
Halden, Inhabitatio Dei Website Review--Sanford Lakoff

John D. Zizioulas, Metropolitan of Pergamon, was previously Professor of Systematic Theology at the University of Glasgow and Visiting Professor at King's College, London. He is the author of Being as Communion (1985), and has been a major Orthodox contributor to modern ecumenical discussion. Paul McPartlan is Professor at the Catholic University of America.

Introduction: Communion and Otherness; 1. On Being Other: Towards an Ontology of Otherness; 2. On Being a Person: Towards an Ontology of Personhood; 3. The Father as Cause: Personhood Generating Otherness; 4. The Trinity and Personhood: Appreciating the Cappadocian Contribution; 5. Pneumatology and the Importance of the Person: A Commentary on the Second Ecumenical Council. 6. Human Capacity and Human Incapacity: A Theological Exploration of Personhood; 7. "Created" and "Uncreated": The Existential Significance of Chalcedonian Christology; 8. The Church as the "Mystical" Body of Christ: Towards an Ecclesial Mysticism.

GOR010092885
Communion and Otherness: Further Studies in Personhood and the Church by John D. Zizioulas
John D. Zizioulas
Used - Well Read
Paperback
Bloomsbury Publishing PLC
2006-11-01
330
0567031489
9780567031488
N/A
Book picture is for illustrative purposes only, actual binding, cover or edition may vary.
This is a used book - there is no escaping the fact it has been read by someone else and it will show signs of wear and previous use. Overall we expect it to be in very good condition, but if you are not entirely satisfied please get in touch with us.