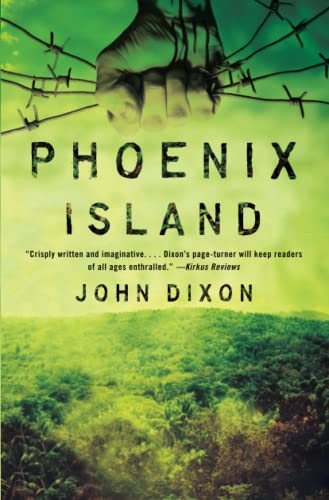 Used Price
$28.49
inc. GST
Free Shipping in Australia
When a tough sixteen-year-old boxing champ sentenced to an isolated boot camp discovers it's actually a mercenary training facility turning "throwaway children" into scientifically enhanced killers, he risks everything to save his friends and stop a madman bent on global destruction.
Reviews:
Trustpilot
Very Good

The judge told Carl that one day he'd have to decide exactly what kind of person he would become. But on Phoenix Island, the choice will be made for him.

A champion boxer with a sharp hook and a short temper, sixteen-year-old Carl Freeman has been shuffled from foster home to foster home. He can't seem to stay out of trouble--using his fists to defend weaker classmates from bullies. His latest incident sends his opponent to the emergency room, and now the court is sending Carl to the worst place on earth: Phoenix Island.

Classified as a "terminal facility," it's the end of the line for delinquents who have no home, no family, and no future. Located somewhere far off the coast of the United States--and immune to its laws--the island is a grueling Spartan-style boot camp run by sadistic drill sergeants who show no mercy to their young, orphan trainees. Sentenced to stay until his eighteenth birthday, Carl plans to play by the rules, so he makes friends with his wisecracking bunkmate, Ross, and a mysterious gray-eyed girl named Octavia. But he makes enemies, too, and after a few rough scrapes, he earns himself the nickname "Hollywood" as well as a string of punishments, including a brutal night in the "sweatbox." But that's nothing compared to what awaits him in the "Chop Shop"--a secret government lab where Carl is given something he never dreamed of.

A new life...A new body. A new brain. Gifts from the fatherly Old Man, who wants to transform Carl into something he's not sure he wants to become. For this is no ordinary government project. Phoenix Island is ground zero for the future of combat intelligence.

And for Carl, it's just the beginning...

"Lord of the Flies meets Wolverine and Cool Hand Luke. A tribute to the indomitable human spirit that challenges the mob and chooses values over expediency."--F. Paul Wilson, New York Times bestselling creator of Repairman Jack
"Filled with both menace and heart, Phoenix Island stands out in all the right ways."--New York Times bestselling author Melissa Marr
"Fast-paced and thoroughly engrossing - I could not put it down!"
--Lissa Price, international bestselling author of Starters
"An unusual premise makes Dixon's thriller debut a welcome series kickoff... the pacing and smooth prose will have suspense fans waiting for the next book, as well as the upcoming CBS adaptation, Intelligence."--Publishers Weekly

GOR008703116
Phoenix Island by John Dixon
John Dixon
Used - Very Good
Paperback
Simon & Schuster
2014-12-01
320
1476738653
9781476738659
Winner of Bram Stoker Awards (Young Adult) 2014 Short-listed for Georgia Peach Book Award for Teen Readers 2015
Book picture is for illustrative purposes only, actual binding, cover or edition may vary.
This is a used book - there is no escaping the fact it has been read by someone else and it will show signs of wear and previous use. Overall we expect it to be in very good condition, but if you are not entirely satisfied please get in touch with us.