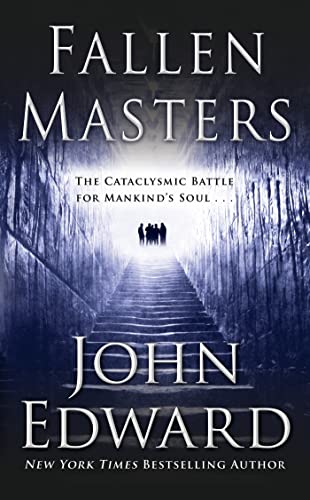 Used Price
$14.49
inc. GST
Free Shipping in Australia
An internationally renowned psychic, the author has helped millions of people to connect with loved ones on the Other Side. In this book, he shows a world on edge, a cataclysmic event of epic proportions as mankind is faced with global destruction.
Very Good Good

An internationally renowned psychic, John Edward has helped millions of people to connect with loved ones on the Other Side. Now Edward has written a riveting novel of metaphysical suspense. Fallen Masters shows a world on edge, a cataclysmic event of epic proportions as mankind is faced with global destruction. Lives are interwoven in mysterious ways: the President of the United States, an international pop star, a fanatical TV cable talking head, a psychic from Barbados, a surgeon, and many more - and the culmination of every personal decision they make will determine if we prevail or fold to the mass of dark energy that is threatening to abolish mankind.

"Compelling...poignant...Coming off like James Van Praagh tempered with the down-to-earth apeal of Caroline Myss, Edward offers an intriguing collection of anecodotes that may not convince the cynical but that can both comfort and fascinate the merely skeptical." --Publishers Weekly on One Last Time

Internationally acclaimed psychic medium JOHN EDWARD has captivated audiences worldwide, using his unique abilities to connect people with loved ones who have passed on. Deeply compelling, often startling, and occasionally humorous, Edward's down-to-earth approach has earned him a vast, loyal following and guest appearances on many TV shows, from Jon Stewart's The Daily Show to Anderson Cooper's Anderson. He is the New York Times bestselling author of Crossing Over and What if God Were the Sun. John Edward resides on Long Island, in New York.

GOR005896470
Fallen Masters by John Edward
John Edward
Used - Very Good
Paperback
Tor Books
2013-08-30
512
0765369214
9780765369215
N/A
Book picture is for illustrative purposes only, actual binding, cover or edition may vary.
This is a used book - there is no escaping the fact it has been read by someone else and it will show signs of wear and previous use. Overall we expect it to be in very good condition, but if you are not entirely satisfied please get in touch with us.