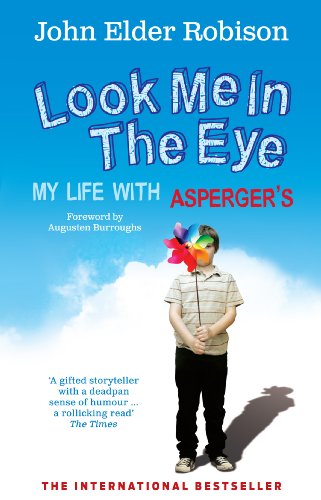 Look Me in the Eye
by John Elder Robison (Author)

Out of Stock
$13.49
+10% GST
From the time he was three or four years old, John Elder Robison realised that he was different from other people.
Very Good
Only 0 left

Look Me in the Eye Summary

Look Me in the Eye: My Life with Asperger's by John Elder Robison (Author)

From the time he was three or four years old, John Elder Robison realised that he was different from other people. He was unable to make eye contact or connect with other children, and by the time he was a teenager his odd habits - an inclination to blurt out non-sequiturs, obsessively dismantle radios or dig five-foot holes (and stick his younger brother in them) - had earned him the label 'social deviant'. It didn't help that his mother conversed with light fixtures and his father spent evenings pickling himself in sherry. Look Me in the Eye is his story of growing up with Asperger's syndrome - a form of autism - at a time when the diagnosis simply didn't exist. Along the way it also tells the story of two brothers born eight years apart yet devoted to each other: the author and his younger brother Chris, who would grow up to become bestselling author Augusten Burroughs. This book is a rare fusion of inspiration, dark comedy and insight into the workings of the human mind. For someone who has struggled all his life to connect with other people, Robison proves to be an extraordinary storyteller.

Look Me in the Eye Reviews

"John has a life that is humanity's version of extreme sport. Even without the Asperger's he would have had an appalling childhood ... This is no misery memoir, however. He is a gifted storyteller with a deadpan sense of humour and the book is a rollicking read" * The Times *
"Of course it's brilliant; my big brother wrote it. But even if it hadn't been created by my big, lumbering, swearing, unshaven "early man" sibling, this is a sweet and funny and sad and true and heartfelt a memoir as one could find, utterly unspoiled, uninfluenced, and original" -- Augusten Burroughs
"John Robison's book is an immensely affecting account of a life lived according to his gifts rather than his limitations. His story provides ample evidence for my belief that individuals on the autistic spectrum are just as capable of rich and productive lives as anyone else" -- Daniel Tammet, author of BORN ON A BLUE DAY
"Deeply felt and often darkly funny, Look Me in the Eye is a delight" * People magazine *
"It's a fantastic life story (highlights include building guitars for KISS) told with grace, humor, and a bracing lack of sentimentality" * Entertainment News *

John Robison lives with his wife and son in Amherst, Massachusetts. His company, J E Robison Service, repairs and restores classic cars such as Jaguars, Land Rovers, Rolls Royces and Bentleys. His website is www.johnrobison.com.

GOR001984678
Look Me in the Eye: My Life with Asperger's by John Elder Robison (Author)
John Elder Robison (Author)
Used - Very Good
Paperback
Ebury Publishing
2009-02-05
304
0091926335
9780091926335
N/A
Book picture is for illustrative purposes only, actual binding, cover or edition may vary.
This is a used book - there is no escaping the fact it has been read by someone else and it will show signs of wear and previous use. Overall we expect it to be in very good condition, but if you are not entirely satisfied please get in touch with us.