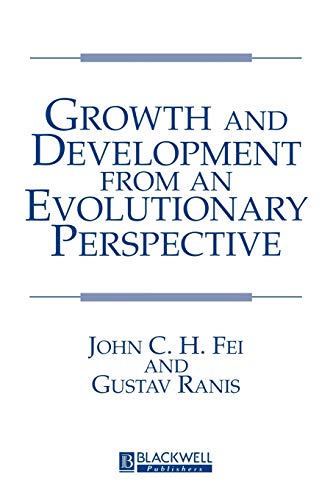 Growth and Development From an Evolutionary Perspective
by John Fei

Out of Stock
$30.99
inc. GST
Traces the evolution of development theory from the Physiocrats and the classical School to Solow, Lewis, and Lucas and Roemer. This book develops a general system of growth equations that focus on the central role of technology change. It demonstrates how political economy factors suggest and enhanced endogenization of policy choices.
Very Good
Only 0 left

Growth and Development From an Evolutionary Perspective Summary

Growth and Development From an Evolutionary Perspective by John Fei

Engendered by renewed interest in development, "Growth and Development from an Evolutionary Perspective" is a result of recent work in the 'new growth theory' arena. This authoritative survey uses 'comparative analytical economic history' to trace the evolution of development theory from the Physiocrats and the classical School to Solow, Lewis, and Lucas and Roemer. Through outlining historical time, typological differences across developing societies, and the transition from agrarianism to modern economic growth, the book arrives at contemporary analyses and current policies. Theoretical sections develop a general system of growth equations that focus on the central role of technology change. Students can apply these equations to sub-phases of transition as well as to the modern growth epoch. Policy-oriented sections discuss contemporary concerns with distribution, poverty alleviations, and human development as they relate to growth over time. This book identifies the policy implications of the development process, comparing East Asian with Latin American cases. In considering future policy, this book demonstrates how political economy factors suggest and enhanced endogenization of policy choices.

Growth and Development From an Evolutionary Perspective Reviews

"The really attractive thing about this book is that it discusses economic development in an evolutionary perspective, with a very detailed catalog of ideal types, but always in a unified theoretical framework. The student will learn a lot about historical development paths, and even more about economic theory." Robert M. Solow, Massachusetts Institute of Technology

John C. H. Fei was formerly Chairman of the Board at the Chung Hua Institute of Economic Research in Taipei, Taiwan. Co-author of five books and more than 75 articles, Fei also served as consultant to organizations such as AID, NPA, UNDP and the National Science Council of Taiwan. A Ph.D. from Massachusetts Institute of Technology, he taught at Cornell University and Yale University.

Gustav Ranis is the Director of The Yale Center for International and Area Studies and Professor of International Economics at Yale University. Having served as consultant to such entities as The World Bank, ADB, AID, OECD, UNIDO, FAO, UNDP, and the Ford and Rockefeller Foundations, Ranis is on the advisory boards, of several third-world research institutions. He has written extensively on theoretical and policy-related issues of development.

GOR010243575
Growth and Development From an Evolutionary Perspective by John Fei
John Fei
Used - Very Good
Paperback
John Wiley and Sons Ltd
1999-09-25
480
0631218890
9780631218890
N/A
Book picture is for illustrative purposes only, actual binding, cover or edition may vary.
This is a used book - there is no escaping the fact it has been read by someone else and it will show signs of wear and previous use. Overall we expect it to be in very good condition, but if you are not entirely satisfied please get in touch with us.