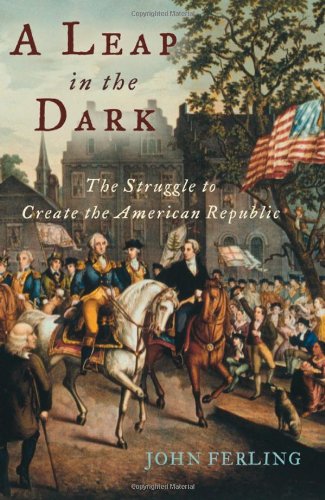 A Leap in the Dark
by John Ferling

Out of Stock
$44.99
inc. GST
It was an age of fascinating leaders and difficult choices, of grand ideas eloquently expressed and of epic conflicts bitterly fought. This John Ferling's portrait of the American Revolution.
Very Good
Only 0 left

A Leap in the Dark Summary

A Leap in the Dark by John Ferling

It was an age of fascinating leaders and difficult choices, of grand ideas eloquently expressed and of epic conflicts bitterly fought. Now comes a brilliant portrait of the American Revolution, one that is compelling in its prose, fascinating in its details, and provocative in its fresh interpretations. In A Leap in the Dark, John Ferling offers a magisterial new history that surges from the first rumblings of colonial protest to the volcanic election of 1800. Ferling's swift-moving narrative teems with fascinating details. We see Benjamin Franklin trying to decide if his loyalty was to Great Britain or to America, and we meet George Washington when he was a shrewd planter-businessman who discovered personal economic advantages to American independence. We encounter those who supported the war against Great Britain in 1776, but opposed independence because it was a "leap in the dark." Following the war, we hear talk in the North of secession from the United States. The author offers a gripping account of the most dramatic events of our history, showing just how closely fought were the struggle for independence, the adoption of the Constitution, and the later battle between Federalists and Democratic-Republicans. Yet, without slowing the flow of events, he has also produced a landmark study of leadership and ideas. Here is all the erratic brilliance of Hamilton and Jefferson battling to shape the new nation, and here too is the passion and political shrewdness of revolutionaries, such as Samuel Adams and Patrick Henry, and their Loyalist counterparts, Joseph Galloway and Thomas Hutchinson. Here as well are activists who are not so well known today, men like Abraham Yates, who battled for democratic change, and Theodore Sedgwick, who fought to preserve the political and social system of the colonial past. Ferling shows that throughout this period the epic political battles often resembled today's politics and the politicians--the founders--played a political hardball attendant with enmities, selfish motivations, and bitterness. The political stakes, this book demonstrates, were extraordinary: first to secure independence, then to determine the meaning of the American Revolution. John Ferling has shown himself to be an insightful historian of our Revolution, and an unusually skillful writer. A Leap in the Dark is his masterpiece, work that provokes, enlightens, and entertains in full measure.

A Leap in the Dark Reviews

Ferling delivers an engaging account of the creation of the United States Eran Shaley, Journal of American Studies This is an account loaded with facts but unburdened by them; the result is a book that never gets bogged down. A gifted biographer, the author interrupts his narrative to introduce the major figures as each comes on the stage, bringing the history of these times to life with vivid descriptions and artful analyses of the interplay of men, their interests and their ideas. Gary L. Mcdowell, Times Literary Supplement A Leap in the Dark is popular history at its best. Ferling has drawn together the research of the leading historians and woven a masterful narrative that is written with grace and flair. Gary L. Mcdowell, Times Literary Supplement John Ferling has here proved himself the master narrator of this great political tale. Gary L. Mcdowell, Times Literary Supplement John Ferling's study of the early United States A Leap into the Dark, is solid history that will refresh anyone's memory of the essential stories and figures in America's founding. And it will enlighten anyone about the origin of some current civic problems ... His book provides not just political and intellectual history, but emotional history as well. Christian Science Monitor (USA) In A Leap in the Dark, John Ferling conveys the personal and contingent character of public affairs by skillfully interweaving capsule biographies of leaders into his analysis of events. His book, which stretches from the French and Indian War through the inauguration of President Thomas Jefferson, supplies a learned and readable narrative of American politics during a crucial era in the nation's history. Richard Brown, University of Connecticut

John Ferling is a Professor of History at the State University of West Georgia. A familiar face in history documentaries on television, he has written numerous books, including John Adams: A Life, The First of Men: A Life of George Washington, and Setting the World Ablaze: Washington, Adams, and Jefferson in the American Revolution.

Introduction: The Past Really is Another Country Part I: Falling From Grace 1: Joseph Glanvill: Scientific Witch-Finder 2: The Man Who Made Underpants for Frogs 3: Pettenkofer's Poisoned Chalice Part II: Eureka! Revisited 4: Sir Isaac Newton and the Meaning of Light 5: Dr. James Lind and the Navy's Scourge 6: The Destruction of Ignaz Semmelweis Part III: Heroes Made to Measure 7: Will the Real Johann Weyer Please Stand Up? 8: Philippe Pinel: The Reforging of a Chain-Breaker Part IV: Do-It-Yourself Heroes 9: The First Casualty of War 10: Rank Hath its Privileges Conslusion: The Bigger Picture

GOR005546126
A Leap in the Dark by John Ferling
John Ferling
Used - Very Good
Hardback
Oxford University Press Inc
2003-05-22
576
0195159241
9780195159240
N/A
Book picture is for illustrative purposes only, actual binding, cover or edition may vary.
This is a used book - there is no escaping the fact it has been read by someone else and it will show signs of wear and previous use. Overall we expect it to be in very good condition, but if you are not entirely satisfied please get in touch with us.