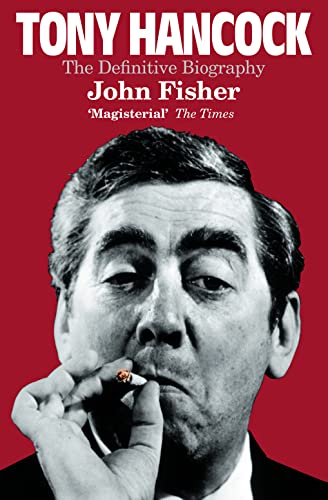 Regarded as the best radio and TV comic of his era, Tony Hancock was a man whose star burned brightly in the eyes and ears of millions before his untimely death in 1968. Now, forty years on, critically acclaimed biographer John Fisher brings the first fully authorised account of his life.

Regarded as the best radio and TV comic of his era, Tony Hancock was a man whose star burned brightly in the eyes and ears of millions before his untimely death in 1968. Now, forty years on, critically acclaimed biographer John Fisher brings the first fully authorised account of his life.

Tony Hancock was one of post-war Britain's most popular comedians - his radio show `Hancock's Half Hour' would clear the streets as whole families tuned in to listen.

His peerless timing and subtle changes in intonation marked Hancock out as a comic genius. His character `Anthony Aloysius St John Hancock' was an amplification of his own persona, a pompous prat whose dreams of success are constantly thwarted. The original British loser that we recognise in Victor Meldrew and Alan Partridge. Wonderfully supported by a cast including Sid James, Hattie Jacques and Kenneth Williams, and working with scripts from Ray Galton and Alan Simpson, Hancock became a huge star. The show was commisioned for TV, showcasing his talent for hilarious facial expression, and he became the first British comedian to earn a thousand pounds a week.

Behind Tony Hancock's success however hid the self-destructive behaviour that plagued him all his life. Prone to self-doubt, and wanting to be the star of his own show, he got rid of James, and finally dismissed Galton and Simpson who had created the platform for his success.

His private life was wracked by his ever increasing alcoholism and bouts of depression, and his relationships shattered by his capacity for violence. His ratings fell and, feeling washed up and alone after divorcing his second wife, he committed suicide in an Australian hotel room in 1968.

Now, forty years after his death John Fisher explores the turbulent life of a man regarded by his peers as one of the greatest British comics to have ever lived.

`If God is in the details then this book has a very strong case for being considered divine.' The Word magazine

`Lives up to its title, dispelling myths and replacing all previous accounts.'
Independent on Sunday

`Packed to bursting point with painstaking attention to detail ...a rich gift from Fisher to anyone who was ever a fan.
Stage

`an indispensible book...a brilliant and much-needed account of Hancock's extensive theatre work and its originality, a celebration of the audacity of the television work, and a kind of voyage round the comedian's mind and the nature of his comic enterprise.
The Guardian

John Fisher has a long and distinguished career as a TV producer working in light entertainment with such giants of comedy as Bob Monkhouse, Spike Milligan, Bruce Forsyth & Tommy Cooper. His most recent work includes Channel 4's critically acclaimed "Heroes of Comedy". An authority on popular entertainment, he has written many books on the subject. `Jus' Like That!', his stage celebration of the life of Tommy Cooper, was a recent West End hit. John is also a member of the Inner Magic Circle.

GOR007327926
Tony Hancock: The Definitive Biography by John Fisher
John Fisher
Used - Like New
Paperback
HarperCollins Publishers
2009-04-30
656
0007266782
9780007266784
N/A
Book picture is for illustrative purposes only, actual binding, cover or edition may vary.
The book has been read, but looks new. The book cover has no visible wear, and the dust jacket is included if applicable. No missing or damaged pages, no tears, possible very minimal creasing, no underlining or highlighting of text, and no writing in the margins.