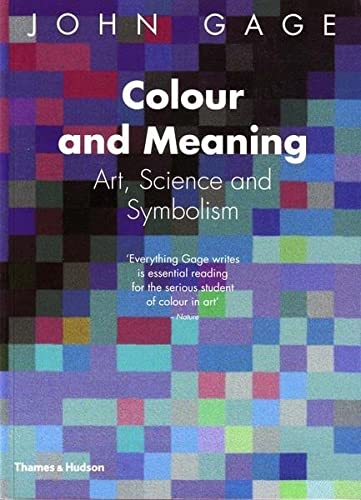 Colour and Meaning
by John Gage

In Stock
$55.99
inc. GST
This study argues that the meaning of colour lies in the particular historical contexts in which it is experienced. Three essays introduce the subject, and the remaining chapters follow themes of colour chronologically, from the early Middle Ages to the 20th century.
Very Good
Only 2 left

Colour and Meaning: Art, Science and Symbolism by John Gage

Is colour just a physiological phenomenon? Does it have an effect on feelings?

This vividly written book, the sequel to the award-winning Colour and Culture, is ultimately informed by the conviction that the meaning of colour lies in the particular historical context in which it is experienced and interpreted.

John Gage explores the mysteries of themes as diverse as the optical mixing techniques implicit in mosaic, colour-languages in Latin America at the time of the Spanish Conquest and the ideas of Goethe and Runge, Blake and Turner. For students and lecturers in the history of art and culture, for artists and designers, and for psychologists and scientists with a special interest in the subject, John Gage has produced a compelling study of the meaning of colour through the ages.

John Gage was the former Head of the Department of History of Art at Cambridge University. He is an acknowledged international authority on the history of art and colour and has written many books on the subject, including Colour and Culture and Colour and Meaning, both published by Thames & Hudson.

Part 1: the contexts of colour; colour and culture; colour in art and its literature. Part 2: colour in history - relative and absolute; colour-words and colour-patches; Ghiberti and light; color Colorado; the fool's paradise; Newton and painting; Blake's Newton; magilphs and mystery; Turner as a colourist; "Two different worlds" - Runge, Goethe and the sphere of colour; mood indigo - from the Blue Flower to the Blue Rider; Chevreul between classicism and romanticism; the technique of Seurat; Seurat's silence; Matisse's black light; colour as language in early abstract painting; a psychological background for early modern colour; making sense of colour - the synaesthetic dimension.

GOR001650592
Colour and Meaning: Art, Science and Symbolism by John Gage
John Gage
Used - Very Good
Paperback
Thames & Hudson Ltd
2000-03-01
320
0500282153
9780500282151
N/A
Book picture is for illustrative purposes only, actual binding, cover or edition may vary.
This is a used book - there is no escaping the fact it has been read by someone else and it will show signs of wear and previous use. Overall we expect it to be in very good condition, but if you are not entirely satisfied please get in touch with us.