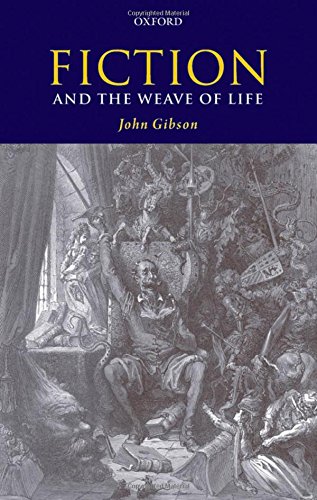 Fiction and the Weave of Life
by John Gibson

In Stock
$43.99
inc. GST
Philosophers have struggled to explain how literary fiction can be such an important source of insight into the human condition. John Gibson offers a novel and intriguing account of the relationship between literature and everyday life, and shows how literature can give us an understanding of our world without literally being about our world.
Very Good
Only 1 left

Fiction and the Weave of Life Summary

Fiction and the Weave of Life by John Gibson

Literature is a source of understanding and insight into the human condition. Yet ever since Aristotle, philosophers have struggled to provide a plausible account of how this can be the case. For surely the fictionality - the sheer invented character - of the literary work means that literature concerns itself not with the real world but with other worlds - what are commonly called fictional worlds. How is it, then, that fictions can tell us something of consequence about reality? In Fiction and the Weave of Life, John Gibson offers a novel and intriguing account of the relationship between literature and life, and shows that literature's great cultural and cognitive value is inseparable from its fictionality and inventiveness.

Fiction and the Weave of Life Reviews

Gibson's book is well-written, erudite and wide-ranging, littered with valuable insights, and his broad vision of cognitive literary value as not constrained by narrow notions of truth and reference is an attractive and welcome one. * Cain Samuel Todd, Analysis Reviews *
Gibson's voice is strong and original and his contribution fresh. Fiction and the Weave of Life is a well written work whose thesis is clearly adjusted and moderately put forward, which distinguishes the study from many earlier superficial literature-illuminates-reality cognitivists notions. Further, the book contains discussion that could be called metaphilosophy of literature and that perspicaciously illustrates the ongoing transition of emphasis from semantic to aesthetic issues in the analytic philosophy of literature. * Jukka Mikkonen The Journal of Aesthetics and Art Criticism *
We need more books like Fiction and the Weave of Life. Brief, coherent, readable and bold...The book is well-written, original, and thought-provoking. It deserves to be widely read. * James Harold, British Journal of Aesthetics *
Gibson is a philosopher of admirable clarity whose discussions contrast favourably with so much work in literary and cultural studies that seems to have little sense of what an argument is. At each point in his presentation, the reader knows just what move is being made in the debate... This is a book to be recommended for its clarity, its precision of argument, its laying out of a strong case for the literary humanist position, and its clear presentation of, and confrontation with, a range of opposing views that currently are popular within the field of philosophy of literature. * Frank B. Farrell, Notre Dame Philosophical Reviews *
engaging and admirably clear contribution to the philosophy of literature...it is a rigorous and stimulating book that offers a balanced critique of contemporary theories and important insights into the philosophical problem of literature. * Clare Carlisle, Times Higher Education *

John Gibson is Associate Professor of Philosophy at the University of Louisville.

GOR010339549
Fiction and the Weave of Life by John Gibson
John Gibson
Used - Very Good
Hardback
Oxford University Press
2007-11-01
212
0199299528
9780199299522
N/A
Book picture is for illustrative purposes only, actual binding, cover or edition may vary.
This is a used book - there is no escaping the fact it has been read by someone else and it will show signs of wear and previous use. Overall we expect it to be in very good condition, but if you are not entirely satisfied please get in touch with us.