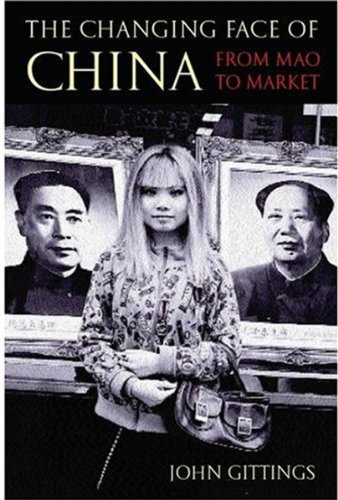 The Changing Face of China
by John Gittings

Out of Stock
$24.99
inc. GST
An account of the dramatic changes in China, from Mao Zedong's revolution through the turmoil of the Red Guards to the country's emergence as a world economic powerhouse.
Very Good
Only 0 left

The Changing Face of China Summary

The Changing Face of China: From Mao to Market by John Gittings

Where is China heading in the 21st century? Can its Communist Party survive or is it being challenged by growing inequality and unrest? Will the US and China cooperate or compete in a dangerous future? Will China's economic boom be brought to a halt by environmental catastrophe? In this highly readable account, John Gittings provides the essential information to help answer these vital questions for the world. In the 60 years since Mao Zedong took the road to victory, China has undergone not one but two revolutions. The first swept away the old corrupt society and sought to build a 'spotless' new socialism behind closed doors; the second since Mao's death has focused on an economic agenda which accepts the goals of global capitalism. From Mao to the global market, Gittings charts this complex but epic tale and concludes with some hard questions for the future.

The Changing Face of China Reviews

This is a book that deserves to be read widely. Gittings knows his China, and we can all be the wiser for reading him... this book provides us with a wealth of knowledge and experience. Martin Jacques, The Guardian no book on China has so effectively set out, analysed, reflected upon and finally summarised the great Chinese conundrum as intelligently and objectively as Gittings. A piece of classic scholarship. Geoffrey Goodman, Tribune Magisterial... Impressive... David Rennie, Daily Telegraph

John Gittings was the Guardian's China specialist and East Asia editor (1983-2003) and opened the newspaper's first staff bureau on the mainland in Shanghai. He began to visit China during the Cultural Revolution and witnessed the major events of the past thirty years, including the Tiananmen Square protests and the Hong Kong handover. His books include works on Chinese foreign policy, military affairs, politics, and domestic society. He has also written on international and nuclear politics and was for many years the Guardian's foreign editorial writer.

1. Introduction: The 'New China'; 2. Search for Socialism: from Liberation to Utopia; 3. Mao Zedong versus the Party: from cult to Cultural Revolution; 4. The Rebel Alternative: from 1919 to the Red Guards; 5. Second Cultural Revolution: the abortive Great Debate; 6. Economics in Command: the modernization of China; 7. Peasant China Transformed: the rise of rural enterprise; 8. The Growth of Dissent: poets and democracy; 9. The Party under Pressure: reform and reaction; 10. The Scholars Speak Out: humanism or bourgeios liberalism?; 11. The Door Opens: foreign trade and economic zones; 12. Tiananmen Square, 1989: turning-point for China; 13. Into the New Millennium: China transformed; 14. China and the World: from Mao to market; Chronology; China's Political Leaders; Bibliography

GOR004520712
The Changing Face of China: From Mao to Market by John Gittings
John Gittings
Used - Very Good
Hardback
Oxford University Press
2005-07-21
384
0192806122
9780192806123
N/A
Book picture is for illustrative purposes only, actual binding, cover or edition may vary.
This is a used book - there is no escaping the fact it has been read by someone else and it will show signs of wear and previous use. Overall we expect it to be in very good condition, but if you are not entirely satisfied please get in touch with us.