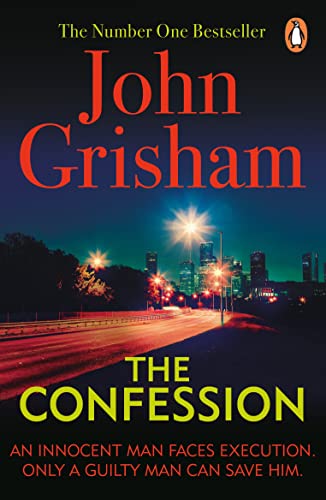 The Confession
by John Grisham

Used Price
$15.49
inc. GST
Free Shipping in Australia
An innocent man is days from execution. He buried her body where it would never be found, then watched and waited as police and prosecutors arrested Donte Drumm, a black local football star with no connection to the crime.So how can a guilty man convince lawyers, judges and politicians that the man they're about to execute is innocent?
Very Good

The Confession by John Grisham

An innocent man is days from execution. Only a guilty man can save him. Travis Boyette is a murderer. In 1998, in the small East Texas city of Sloan, he abducted, raped, and strangled a popular high-school cheerleader. He buried her body where it would never be found, then watched and waited as police and prosecutors arrested Donte Drumm, a black local football star with no connection to the crime. Tried, convicted and sentenced, Drumm was sent to death row. Nine years later, Donte Drumm is four days from execution. Over 400 miles away in Kansas, Travis also faecs death, suffering from an inoperable brain tumour. At long last, he decides to do what's right. After years of silence, he is ready to confess. But the law doesn't want to hear it. As far as they're concerned, they've got their man. So how can a guilty man convince lawyers, judges and politicians that the man they're about to execute is innocent?

"Grisham has come up with yet another near-flawless plot... ****" * Mirror *
"John Grisham is of course celebrated for his brilliant legal thrillers and in that field he has few equals" -- Barry Forshaw * Daily Express *
"The Confession is an airing for the beliefs of the author, but it is also a page-turner. Grisham is careful never to preach ... he never forgets his primary purpose which is to entertain ... Grishamites will find all their buttons pressed." -- Barry Forshaw * Independent *
"The Confession is a campaigning novel, attacking the death penalty and a way of doing justice (with a malign nexus of thuggish cops, supine judges and officials elected on promises of being hard on crime) that Texas epitomises ... another engrossing, teeming portrait of the Deep South." -- John Dugdale * Sunday Times *
"Grisham's storytelling genius reminds us that when it comes to legal drama, the master is in a league of his own." -- Shari Low * Daily Record *

John Grisham is the author of twenty-two novels, one work of non-fiction, a collection of short stories, and a novel for young readers. He is on the Board of Directors for the Innocence Project in New York and is the Chairman on the Board of Directors for the Mississippi Innocence Project at the Mississippi School of Law. He lives in Virginia and Mississippi. His website is www.johngrisham.co.uk.

GOR002629781
The Confession by John Grisham
John Grisham
Used - Very Good
Paperback
Cornerstone
2011-02-26
464
0099545799
9780099545798
N/A
Book picture is for illustrative purposes only, actual binding, cover or edition may vary.
This is a used book - there is no escaping the fact it has been read by someone else and it will show signs of wear and previous use. Overall we expect it to be in very good condition, but if you are not entirely satisfied please get in touch with us.