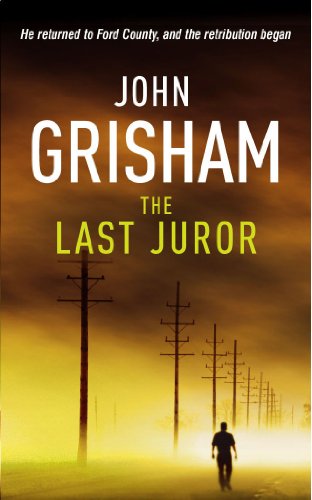 The Last Juror
by John Grisham

In Stock
$11.49
+10% GST
In 1970, The Ford County Times, one of Mississipi's more colourful weekly newspapers, went bankrupt. But in Mississippi in 1970 'life' didn't necessarily mean 'life', and nine years later Danny Padgitt managed to get himself paroled.
Very Good Good
11 in stock

The Last Juror by John Grisham

In 1970, The Ford County Times, one of Mississipi's more colourful weekly newspapers, went bankrupt. To the surprise and dismay of many, ownership was assumed by 23-year-old college drop-out, Willie Traynor. The future of the paper looked grim until a young mother was brutally raped and murdered by a member of the notorious Padgitt family. Traynor reported all the gruesome details, and his newspaper began to prosper. The murderer, Danny Padgitt, was tried before a packed courtroom in Clanton, Mississippi. The trial came to a startling, dramatic end when the defendant threatened revenge against the jurors if they convicted him. Nevertheless, they found him guilty, and he was sentenced to life in prison. But in Mississippi in 1970 'life' didn't necessarily mean 'life', and nine years later Danny Padgitt managed to get himself paroled. He returned to Ford County, and the retribution began.

"The Last Juror sees Grisham at the absolute peak of his form - page-turning urgency" * Mail on Sunday *
"Masterful - when Grisham gets in the courtroom he lets rip, drawing scenes so real they're not just alive, they're pulsating - quality thriller writing" * Daily Mirror *
"The Last Juror does not need to coast on its author's megapopularity. It's a reminder of how the Grisham juggernaut began" * New York Times *
"Wholly engrossing - Grisham's story-telling knack has not deserted him; and the hint that something more serious is at stake than the solution of a crime gives the narrative an extra depth" * Evening Standard *

GOR008759741
The Last Juror by John Grisham
John Grisham
Used - Very Good
Paperback
Cornerstone
2004-10-01
512
0099457156
9780099457152
N/A
Book picture is for illustrative purposes only, actual binding, cover or edition may vary.
This is a used book - there is no escaping the fact it has been read by someone else and it will show signs of wear and previous use. Overall we expect it to be in very good condition, but if you are not entirely satisfied please get in touch with us.