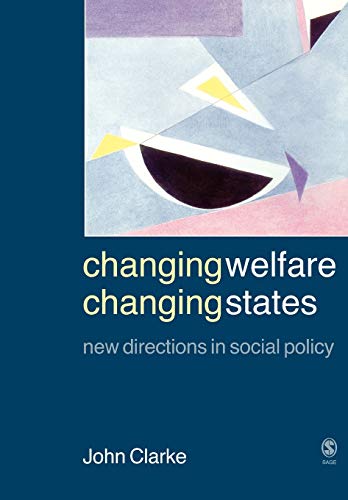 Out of Stock
$18.49
inc. GST
Analyses the remaking of the relationships between welfare, state and nation.
Good
Only 0 left

`John Clarke brings a fresh, critical, "idiosyncratic" eye to the task of thinking about the ways in which states do welfare. He paints a rich and broad canvas, using a palette that blends social, cultural, political and economic perspectives. Changing Welfare, Changing States is an important addition to the welfare state literature' - Ruth Lister, Professor of Social Policy, Loughborough University.

Changing Welfare, Changing States disentangles the various answers to these questions, inviting us to think differently about the remaking of the relationships between welfare, state and nation. Informed by the `cultural turn' in the social sciences, the book reflects a commitment to the importance of rethinking social policy at a time when social, political and intellectual certainties have been profoundly unsettled.

Key features of the book include:

} broad coverage - engages with a range of approaches to the study of welfare states, drawing on social policy, politics, sociology, anthropology and cultural studies.

} contributes to key debates on: globalization, neo-liberalism, changing forms of governance and conflicts over citizenship in the contemporary remaking of welfare states.

Written by a leading academic in the field, the book has a flowing narrative and clear structure that makes it accessible to and popular with students and academics alike. It is an invaluable resource for undergraduates and postgraduates in the field of social policy and will also be of interest to students and researchers in related disciplines such as sociology, politics, anthropology and cultural studies.

GOR005910843
Changing Welfare, Changing States: New Directions in Social Policy by John H. Clarke
John H. Clarke
Used - Good
Paperback
SAGE Publications Inc
2004-03-31
192
0761942033
9780761942030
N/A
Book picture is for illustrative purposes only, actual binding, cover or edition may vary.
This is a used book - there is no escaping the fact it has been read by someone else and it will show signs of wear and previous use. Overall we expect it to be in very good condition, but if you are not entirely satisfied please get in touch with us.