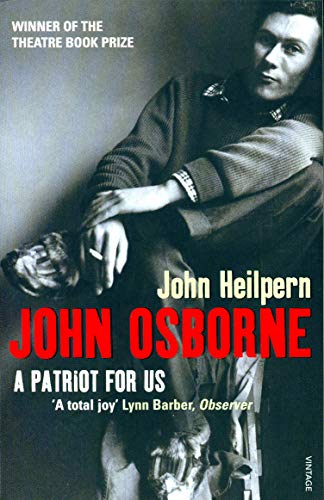 John Osborne: A Patriot for Us by John Heilpern

John Osborne (1929-1994), unapologetic rebel and original Angry Young Man, changed the face of modern British theatre forever with Look Back in Anger. An actor turned playwright, Osborne was married five times, his private life generating a tumult and drama to match that of his work. This startlightly candid, authorised but intimate and informal biography is the first to have access to Osborne's own notebooks and private letters, which record for posterity his often anguished nature. It includes personal interviews with scores of his friends and enemies, among them a bombshell of a confession from Osborne's alleged male lover, and the first public comments from his estranged daughter Nolan, who was thrown out of the family home at just sixteen. This is an essential, unorthodox, moving and extraordinarily frank portrait of the man, the playwright and his era.

"[Heilpern] writes with infectious verve, championing the plays against carpers and cavillers, and showing how close they were to their creator's raw experience. Above all he celebrates Osborne's cross-grained vitality. His book brings a flesh-and-blood human being back from the shades, shouting, like Jimmy Porter 'Hallelujah! I'm alive!'" -- John Carey * Sunday Times *
"His biography is surely a model of its kind: tightly written, vivid, witty, knowledgeable and with a seamless, and often moving, interweaving of the past and present" -- Craig Brown * Mail on Sunday *
"An enjoyable, exhaustive, well-researched and highly readable biography" -- Michael Arditti * Independent *
"Heilpern has produced a riveting biography - Heilpern orchestrates his complex narrative with flair and contrives to invoke affection in the face of bad behaviour....judicious and dependable" -- Valerie Grove * The Times *
"Osborne has found his ideal biographer" * John Banville *

Born in Manchester and educated at Oxford, John Heilpern wrote award-winning interviews for the Observer before becoming a Times columnist in New York. He has worked with Peter Hall at the National Theatre and with Michael Bennett on Broadway. He is the author of a classic book about the theatre, Conference of the Birds: The Story of Peter Brook in Africa, and of How Good Is David Mamet, Anyway - Writings on Theatre and Why it Matters. He now lives in Manhattan where he is drama critic of the New York Observer.

GOR001413106
John Osborne: A Patriot for Us by John Heilpern
John Heilpern
Used - Very Good
Paperback
Vintage Publishing
2007-06-07
560
0099275864
9780099275862
Winner of Theatre Book Prize 2006
Book picture is for illustrative purposes only, actual binding, cover or edition may vary.
This is a used book - there is no escaping the fact it has been read by someone else and it will show signs of wear and previous use. Overall we expect it to be in very good condition, but if you are not entirely satisfied please get in touch with us.