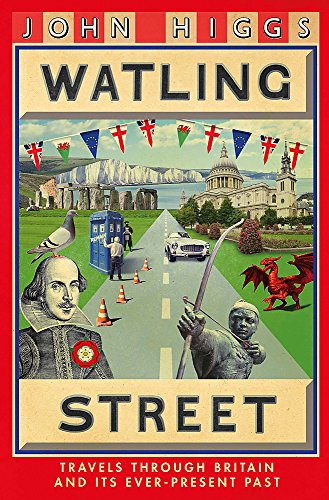 Used Price
$24.99
inc. GST
Free Shipping in Australia
A journey along one of Britain's oldest roads, from Dover to Anglesey, in search of the hidden history that makes us who we are today.
Very Good

Watling Street: Travels Through Britain and Its Ever-Present Past by John Higgs

A journey along one of Britain's oldest roads, from Dover to Anglesey, in search of the hidden history that makes us who we are today.

Long ago a path was created by the passage of feet tramping through endless forests. Gradually that path became a track, and the track became a road. It connected the White Cliffs of Dover to the Druid groves of the Welsh island of Anglesey, across a land that was first called Albion then Britain, Mercia and eventually England and Wales. Armies from Rome arrived and straightened this 444 kilometres of meandering track, which in the Dark Ages gained the name Watling Street. Today, this ancient road goes by many different names: the A2, the A5 and the M6 Toll. It is a palimpsest that is always being rewritten.

Watling Street is a road of witches and ghosts, of queens and highwaymen, of history and myth, of Chaucer, Dickens and James Bond. Along this route Boudicca met her end, the Battle of Bosworth changed royal history, Bletchley Park code breakers cracked Nazi transmissions and Capability Brown remodelled the English landscape.

The myriad people who use this road every day might think it unremarkable, but, as John Higgs shows, it hides its secrets in plain sight. Watling Street is not just the story of a route across our island, but an acutely observed, unexpected exploration of Britain and who we are today, told with wit and flair, and an unerring eye for the curious and surprising.

'In Watling Street, an exploration of modern Britain and what it means to be British today, Higgs offers a more nuanced understanding of the national psyche . . . a book for our times' -- Ian Thomson * Observer *
'Mischievous and iconoclastic . . . [Higgs's] is a systematising imagination, able to harness disparate elements and find the patterns that animate them; that he does so in a more socially inclusive manner than many enriches his theories enormously' -- Melissa Harrison * Financial Times *
'A new vision of England . . . full of magic, mystery and bits of William Blake' -- Ian Samson * Times Literary Supplement *
'A bravura piece of writing - Bill Bryson on acid' -- Tom Holland
'It has been said by the old magicians that Watling Street was created in a single night. Or revealed to us between sleeping and waking - a potentiality that is always there but which we have to learn to read. John Higgs does just that: a bright necklace of recoveries and collisions and remarkable witnesses. A tale-telling pilgrim to entertain and inform as we jolt along the way' -- Iain Sinclair
'A humorous and thoughtful guide' -- Huston Gilmore * Daily Express *
'Myths combine with staggeringly fascinating facts, while Higgs' take on our national imagination and the nature of history is refreshingly original . . . [A] mad, but brilliant, odyssey' -- Rebecca Armstrong * I Paper *
'Watling Street is unusual, original and strangely beautiful. It's full of wonderful stories about this remarkable road, expertly brought to life by Higgs. And even though it's a travel book, it has more to say about the current climate than most political books' -- Jamie Bartlett, author of Radicals
'On a long drive like this, your companion matters as much as the route, of course - and Higgs is an entertaining one, garrulous but disinclined to hector' -- Tom Sutcliffe * Mail on Sunday Event *
'A truly fascinating book . . . from one of the best writers on cultural history we have' -- Scott Pack
'In these divisive times, when British identity is so much discussed, Watling Street is a rich and relevant work, making a compelling case that our truest heritage is simply the spirituality of the land and the vast, vibrant patchwork of our individual stories' -- Richard Tarrant * The Lady *
'One of those books where you constantly find yourself underlining pithy quotes, it's a compelling study of the origins of our national identity, at a time when it's becoming more complex than ever' -- Caroline Sanderson * The Bookseller *
'A fascinating, erudite and esoteric portrait of Britain . . . Cliche-free and engrossing, this is a wonderful book' * New European *
'Juggling wit and wisdom, [Higgs] brings a lively twist to a thoroughly British story' * Choice *
'Wry and thought-provoking. Higgs expresses a history that is not simply that of kings or victors, but of the British people who have shaped the Britain we know' * Who Do You Think You Are? magazine *
'The range of reference in this book makes for an inspiring read, and anyone with an interest in British history or identity will find something to learn, and something to think about' * Your Family History *
'In the same way that Watling Street slices through the UK, Higgs's trademark crystal clarity of thought slices through this country's nationalistic hysteria. We owe it to ourselves to join him on this vital and endlessly insightful journey' -- Jason Arnopp, author of The Last Days of Jack Sparks
'It is an ambitious attempt to find a grassroots British identity that eschews the political, and one that ultimately succeeds' -- Adam Cunnane * Big Issue in the North *
'One of the best books I've ever read . . . addictively illuminating in these turbulent times' -- Martin 'Youth' Glover
'It's erudite, funny, philosophical, often wildly esoteric and packed with factual asides . . . Above all Watling Street provokes a new and exciting discourse on national pride and identity. You can hear the singing of our ancestors in a chorus of shared heritage whose melody is steeped in the land' -- Charlie Connelly * New European *
'[A] delightful and inventive contemplation of the way history has shaped Britain, and vice versa' -- Mick Herron * Geographical *
'Fascinating stuff' * History Revealed *
A timely look at national identity and how it forges the world around us. * WANDERLUST *

John Higgs is the author of I HAVE AMERICA SURROUNDED: THE LIFE OF TIMOTHY LEARY; THE KLF: CHAOS, MAGIC AND THE BAND WHO BURNED A MILLION POUNDS; STRANGER THAN WE CAN IMAGINE: MAKING SENSE OF THE TWENTIETH CENTURY; and the novels THE BRANDY OF THE DAMNED and THE FIRST CHURCH ON THE MOON. He lives in Brighton with his partner and their two children.

GOR008481615
Watling Street: Travels Through Britain and Its Ever-Present Past by John Higgs
John Higgs
Used - Very Good
Hardback
Orion Publishing Co
2017-07-11
384
1474603475
9781474603478
N/A
Book picture is for illustrative purposes only, actual binding, cover or edition may vary.
This is a used book - there is no escaping the fact it has been read by someone else and it will show signs of wear and previous use. Overall we expect it to be in very good condition, but if you are not entirely satisfied please get in touch with us.