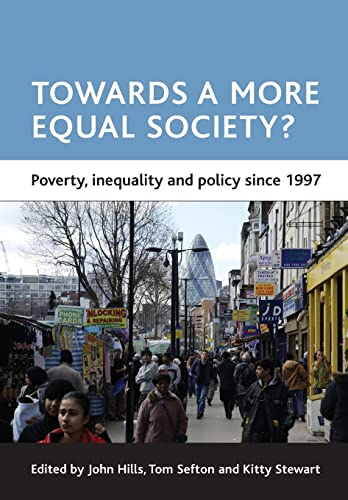 Towards a more equal society?
by John Hills (London School of Economics and Political Science)

Used Price
$25.49
inc. GST
Free Shipping in Australia
As New Labour approaches the end of an unprecedented third term in office, this bestselling book asks whether Britain is more equal than it was in 1997. This second volume, following on from the highly successful "A more equal society?", provides an independent assessment of the success or otherwise of New Labour's policies.
Reviews:
Trustpilot
Very Good

Towards a more equal society? Summary

Towards a more equal society?: Poverty, inequality and policy since 1997 by John Hills (London School of Economics and Political Science)

When New Labour came to power in 1997, its leaders asked for it to be judged after ten years on its success in making Britain 'a more equal society'. As it approaches the end of an unprecedented third term in office, this book asks whether Britain has indeed moved in that direction. The highly successful earlier volume "A more equal society?" was described by Polly Toynbee as "the LSE's mighty judgement on inequality". Now this second volume by the same team of authors provides an independent assessment of the success or otherwise of New Labour's policies over a longer period. It provides: * consideration by a range of expert authors of a broad set of indicators and policy areas affecting poverty, inequality and social exclusion; * analysis of developments up to the third term on areas including income inequality, education, employment, health inequalities, neighbourhoods, minority ethnic groups, children and older people; * an assessment of outcomes a decade on, asking whether policies stood up to the challenges, and whether successful strategies have been sustained or have run out of steam; chapters on migration, social attitudes, the devolved administrations, the new Equality and Human Rights Commission, and future pressures. The book is essential reading for academic and student audiences with an interest in contemporary social policy, as well as for all those seeking an objective account of Labour's achievements in power.

Towards a more equal society? Reviews

"If you want a deep and even-handed project to rethink egalitarianism for the current age, turn to Towards a more equal society? ... The academics reporting in this volume have conducted painstaking statistical analysis. There are no cartoons, diverting vignettes or uplifting quotations. But the narrative - cautious, nuanced, understated - is all the more persuasive for that. If we want a fairer society, let us start with the facts." Richard Reeves, The Observer
"Hills is the great authority, the chief examiner most feared and respected, social policy's equivalent of an Ofsted inspector. This great tome, with its hundreds of graphs and tables, will prove to be the definitive academic judgment." Polly Toynbee, The Guardian
"Welfare reform has been at the heart of the New Labour project. This book is the definitive assessment of those reforms: where they succeeded, where they failed - and why." Alan Deacon, Emeritus Professor of Social Policy, University of Leeds "The LSE's mighty judgement on inequality" Polly Toynbee, The Guardian, on A More Equal Society

About John Hills (London School of Economics and Political Science)

John Hills is Director of the Centre for Analysis of Social Exclusion (CASE)and Professor of Social Policy at the London School of Economics and Political Science(LSE). Tom Sefton was formerly a research fellow at CASE, and now works for the Church Urban Fund. Kitty Stewart is a lecturer in social policy at LSE and a research associate at CASE.

GOR005408135
Towards a more equal society?: Poverty, inequality and policy since 1997 by John Hills (London School of Economics and Political Science)
John Hills (London School of Economics and Political Science)
CASE Studies on Poverty, Place and Policy
Used - Very Good
Paperback
Policy Press
2009-02-25
432
1847422012
9781847422019
N/A
Book picture is for illustrative purposes only, actual binding, cover or edition may vary.
This is a used book - there is no escaping the fact it has been read by someone else and it will show signs of wear and previous use. Overall we expect it to be in very good condition, but if you are not entirely satisfied please get in touch with us.