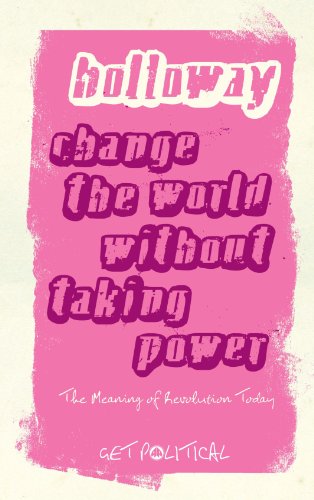 Change the World Without Taking Power
by John Holloway

In Stock
$36.99
inc. GST
New edition of John Holloway's contemporary classic fusion of political philosophy and activism, including an extensive new preface by the author.
Like New
Only 1 left

Change the World Without Taking Power: The Meaning of Revolution Today by John Holloway

The wave of political demonstrations since the Battle of Seattle in 2001 have crystallised a new trend in left-wing politics. Modern protest movements are grounding their actions in both Marxism and Anarchism, fighting for radical social change in terms that have nothing to do with the taking of state power. This is in clear opposition to the traditional Marxist theory of revolution, which centres on the overthrow of government. In this book, John Holloway asks how we can reformulate our understanding of revolution as the struggle against power, not for power.

After a century of failed attempts by revolutionary and reformist movements to bring about radical social change, the concept of revolution itself is in crisis. John Holloway opens up the theoretical debate, reposing some of the basic concepts of Marxism in a critical development of the subversive Marxist tradition represented by Adorno, Bloch and Lukacs, amongst others, and grounded in a rethinking of Marx's concept of 'fetishisation' - how doing is transformed into being.

'Stands alongside Hardt and Negri's Empire as one of the two key texts of contemporary autonomist Marxism' -- Alex Callinicos, Capital & Class
'This is a refreshing, thought provoking book ... A must read for every student and practitioner of political science' -- USI Journal
'Holloway's thesis is indeed important and worthy of notice' -- Richard J. F. Day. TOPIA, Canadian Journal of Cultural Studies

John Holloway is a Professor in the Instituto de Ciencias Sociales y Humanidades of the Benemerita Universidad Autonoma de Puebla in Mexico. He is the author of Crack Capitalism (Pluto, 2010), Change the World Without Taking Power (Pluto, 2019) and Negativity and Revolution (Pluto, 2008).

Acknowledgements Preface to the New Edition Preface to the First Edition 1. The Scream 2. Beyond the State? 3. Beyond Power? 4. AFetishism - The Tragic Dilemma 5. Fetishism and Fetishisation 6. Anti-Fetishism and Criticism 7. The Tradition of Scientific Marxism 8. The Critical-Revolutionary Subject 9. The Material Reality of Anti-Power 10. The Material Reality of Anti-Power and the Crisis of Capital 11. Revolution? 12. Epilogue to new edition: Moving Against and Beyond: Reflections on a Discussion Notes Bibliography Index

GOR010737323
Change the World Without Taking Power: The Meaning of Revolution Today by John Holloway
John Holloway
Get Political
Used - Like New
Paperback
Pluto Press
2010-09-06
296
0745329187
9780745329185
N/A
Book picture is for illustrative purposes only, actual binding, cover or edition may vary.
The book has been read, but looks new. The book cover has no visible wear, and the dust jacket is included if applicable. No missing or damaged pages, no tears, possible very minimal creasing, no underlining or highlighting of text, and no writing in the margins.