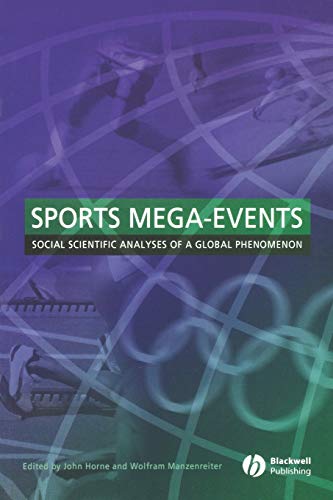 Used Price
$39.99
inc. GST
Free Shipping in Australia
This volume offers a distinctive and timely comparative analysis of the sociological, economic, and political significance of bids for, and the hosting of, sports mega-events throughout the world.

A collection by leading international scholars examining sports mega-events, such as the Olympic Games and the FIFA World Cup.
Reviews:
Trustpilot
Very Good

John Horne is Senior Lecturer in the Sociology of Sport and Leisure at the University of Edinburgh. He has published many articles and book chapters on sport, leisure and popular culture and is the author of Sport in Consumer Culture (2006) and co-author of Understanding Sport (1999, with Alan Tomlinson and Garry Whannel). He is the co-editor of Sport, Leisure and Social Relations (1987, Sociological Review Monograph No. 33, with David Jary and Alan Tomlinson), Japan, Korea and the 2002 World Cup (2002, with Wolfram Manzenreiter) and Football Goes East: Business, Culture and the People's Game in China, Japan and Korea (2004, with Wolfram Manzenreiter). He has also edited two Leisure Studies Association publications: Leisure Cultures, Consumption and Commodification (2001) and Masculinities: Leisure Cultures, Identities and Consumption (2000, with Scott Fleming).

Wolfram Manzenreiter is Assistant Professor at the Institute of East Asian Studies, Vienna University, where he lectures on modern Japanese society. His major research interests are concerned with the social and economic implications of sport and popular culture in contemporary Japan. He is author of several books and articles on popular culture, leisure and sport in Japan. Currently he is working on a new book entitled Sport and Nation in Japan. In addition to the co-edited volumes with John Horne, Football Goes East (2004) and Japan, Korea and the 2002 World Cup (2002), his recent works include the monographs The Social Construction of Japanese Mountaineering (2000), and Pachinko Monogatari: Japan's Gambling Industry (1998), both published in German.

1. An introduction to the sociology of sports mega-events: John Horne (University of Edinburgh, UK) and Wolfram Manzenreiter (University of Vienna, Austria).

5. Underestimated costs and overestimated benefits? Comparing the outcomes of sports mega-events in Canada and Japan: David Whitson (University of Alberta, at Edmonton, Canada) and John Horne (University of Edinburgh).

Part 3: Power, spectacle and the city.

GOR005358582
Sports Mega-Events: Social Scientific Analyses of a Global Phenomenon by John Horne
John Horne
Sociological Review Monographs
Used - Very Good
Paperback
John Wiley and Sons Ltd
2006-09-08
212
1405152907
9781405152907
N/A
Book picture is for illustrative purposes only, actual binding, cover or edition may vary.
This is a used book - there is no escaping the fact it has been read by someone else and it will show signs of wear and previous use. Overall we expect it to be in very good condition, but if you are not entirely satisfied please get in touch with us.