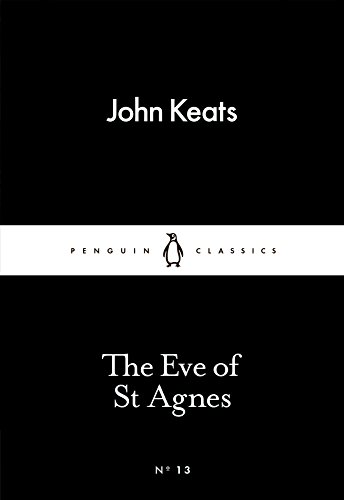 The Eve of St Agnes
by John Keats

The Eve of St Agnes Summary

The Eve of St Agnes by John Keats

This volume contains a selection of Keats's greatest verse - including his gothic story in verse, 'The Eve of St Agnes', and the mysterious 'Lamia' - exploring themes of love, enchantment, myth and magic.

Introducing Little Black Classics: 80 books for Penguin's 80th birthday. Little Black Classics celebrate the huge range and diversity of Penguin Classics, with books from around the world and across many centuries. They take us from a balloon ride over Victorian London to a garden of blossom in Japan, from Tierra del Fuego to 16th-century California and the Russian steppe. Here are stories lyrical and savage; poems epic and intimate; essays satirical and inspirational; and ideas that have shaped the lives of millions.

John Keats (1795-1821) is one of the greatest English poets and a key figure in the Romantic movement. He grew up in London and undertook medical training before finding his vocation in poetry. His poems include 'The Eve of St Agnes', 'La Belle Dame Sans Merci' and 'To Autumn', and his group of five odes, which include 'Ode to a Nightingale', are ranked among the greatest short poems in the English language. They were written shortly before his tragically early death, in Rome, from tuberculosis at the age of twenty-five.

GOR006904657
The Eve of St Agnes by John Keats
John Keats
Penguin Little Black Classics
Used - Very Good
Paperback
Penguin Books Ltd
2015-02-25
64
0141398299
9780141398297
N/A
Book picture is for illustrative purposes only, actual binding, cover or edition may vary.
This is a used book - there is no escaping the fact it has been read by someone else and it will show signs of wear and previous use. Overall we expect it to be in very good condition, but if you are not entirely satisfied please get in touch with us.