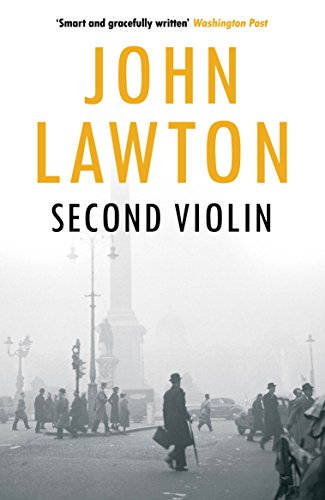 Written by 'a sublimely elegant historical novelist as addictive as crack' (Daily Telegraph), the Inspector Troy series is perfect for fans of Le Carre, Philip Kerr and Alan Furst.

The Germans take Vienna without a shot being fired. Covering Austria for the English press is a young journalist named Rod Troy. Back home his younger brother joins the CID as a detective constable.

Two years later tensions are rising and 'enemy aliens' are rounded up in London for internment. In the midst of the chaos London's most prominent rabbis are being picked off one by one and Troy must race to stop the killer.

One of the joys of reviewing crime fiction is that now and then one comes across . . . an author whose writing sets pulses racing and the jaded responses tingling. . . I entreat you, dear reader, to search out John Lawton and cherish him to your bosom, for he is truly an original. * Irish Times *
Smart and gracefully written . . . It has been Lawton's achievement to capture, in first-rate popular fiction, the courage and drama -- and the widespread tomorrow-we-may-die exuberance -- of that terrible and thrilling moment in twentieth-century history. * Washington Post *

John Lawton worked for Channel 4 for many years, and, among many others, produced Harold Pinter's 'O Superman', the least-watched most-argued-over programme of the 90s. He has written seven novels in his Troy series, two Joe Wilderness novels, the standalone Sweet Sunday, a couple of short stories and the occasional essay. He writes very slowly and almost entirely on the hoof in the USA or Italy, but professes to be a resident of a tiny village in the Derbyshire Peak District. He admires the work of Barbara Gowdy, TC Boyle, Oliver Bleeck, Franz Schubert and Clara Schumann - and is passionate about the playing of Maria Joao Pires. He has no known hobbies, belongs to no organisations and hates being photographed.

GOR005360456
Second Violin by John Lawton
John Lawton
Inspector Troy
Used - Very Good
Paperback
Grove Press / Atlantic Monthly Press
2013-09-05
432
1611855861
9781611855869
N/A
Book picture is for illustrative purposes only, actual binding, cover or edition may vary.
This is a used book - there is no escaping the fact it has been read by someone else and it will show signs of wear and previous use. Overall we expect it to be in very good condition, but if you are not entirely satisfied please get in touch with us.