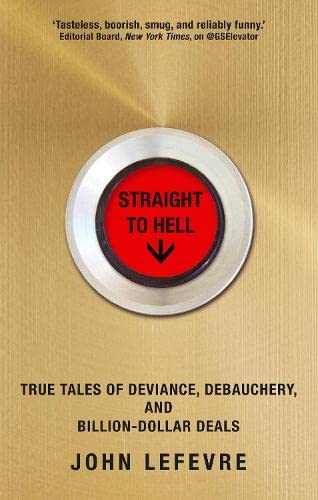 Straight to Hell
by John LeFevre

Used Price
$17.99
inc. GST
Free Shipping in Australia
From the man behind the infamous @GSElevator Twitter account, true stories from the wild world of international finance.
Like New Very Good

Over the past three years, the notorious @GSElevator Twitter feed has offered a hilarious, shamelessly voyeuristic look into the real world of international finance. Hundreds of thousands followed the account, Goldman Sachs launched an internal investigation, and when the true identity of the man behind it all was revealed, it created a national media sensation-but that's only part of the story. Where @GSElevator captured the essence of the banking elite with curated jokes and submissions overheard by readers, Straight to Hell adds John LeFevre's own story-an unapologetic and darkly funny account of a career as a globe-conquering investment banker spanning New York, London, and Hong Kong. Straight to Hell pulls back the curtain on a world that is both hated and envied, taking readers from the trading floors and roadshows to private planes and after-hours overindulgence. Full of shocking lawlessness, boyish antics, and win-at-all-costs schemes, this is the definitive take on the deviant, dysfunctional, and absolutely excessive world of finance.

His story reads like a frat boy's fever dream of the high-flying life: morning drinking, late-night drinking, and drinking all the hours in between; pranks, bar fights, cheating, travel, and prostitutes... Equal parts fun and train wreck, this is a tale engineered to astonish anyone who wondered which fools were behind the crash of 2008; few could have pictured how absurd the truth really was. * Publishers Weekly *
This book is going to annoy and offend a lot of people, with good reason. It is a vicious, vacuous, caustic world he illuminates. But it would be a shameful waste if we didn't have Lefevre to find the humour in it all. * Euromoney.com *

John LeFevre has enjoyed a distinguished career in international finance. He joined Salomon Brothers immediately out of college, and worked for Citigroup in New York, London, and Hong Kong. In 2010 he was hired by Goldman Sachs to be head of Debt Syndicate in Asia, a position that he eventually did not take due to a contractual issue. He has written for Business Insider and has been interviewed about @GSElevator by the New York Times, CNN, and other outlets.

GOR006846457
Straight to Hell: True Tales of Deviance, Debauchery and Billion-Dollar Deals by John LeFevre
John LeFevre
Used - Like New
Paperback
Grove Press / Atlantic Monthly Press
2015-07-16
336
1611855543
9781611855548
N/A
Book picture is for illustrative purposes only, actual binding, cover or edition may vary.
The book has been read, but looks new. The book cover has no visible wear, and the dust jacket is included if applicable. No missing or damaged pages, no tears, possible very minimal creasing, no underlining or highlighting of text, and no writing in the margins.