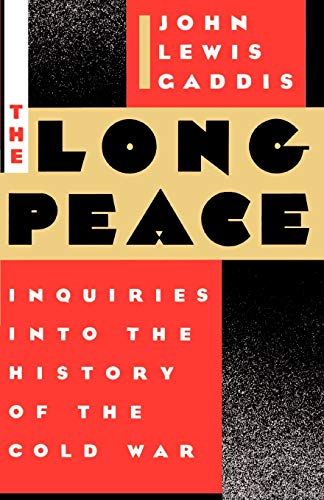 Out of Stock
$32.99
inc. GST
How have the United States and the Soviet Union managed to get through more than four decades of Cold War without actually going to war with each other? In this book John Gaddis uses recently released American and British documents to explore key issues in Cold War history that remain unresolved, suggesting answers to this and other vital questions about post-war diplomacy.
Very Good
Only 0 left

The Long Peace: Inquiries into the History of the Cold War by John Lewis Gaddis (Professor of History, Ohio University)

How has it happened that the United States and the Soviet Union have managed to get through more than four decades of Cold War confrontation without going to war with one another? Historian John Lewis Gaddis suggests answer to this and other vital questions about post-war diplomacy in this new book. Gaddis uses recently declassified American and British documents to explore several key issues in Cold War history that remain unresolved: Precisely what itwas about the Soviet Union's behaviour after World War II that American leaders found so threatening? Whether the United States really wanted a sphere of influence in post-war Europe? What led the Truman administration first to endorse, but then immediately to avoid American military involvement on the mainland of Asia? This is a provocative exercise in contemporary history, certain to generate new insights on both past and present aspects of the age we live in.

`However circumscribed the tropics, Gaddis manages to infuse into each one a richness of association, of apposite generalization, which lifts them beyond the level of standart academic treatment. he is revealed above all as a highly rational and liberal-minded observer, a sharp dissector of human folly, who is yet quick to appreciate strengths where they are to be found times higher education-august 1988
'Gaddis writes superbly well, no mean task when mixing narrative, analysis, personal reflection and advocacy ... Gaddis' powers of synthesis are, as ever, most impressive of all.' The Washington Post
'Gaddis raises some interesting and timely questions ... This provocative and well-argued work is recommended' Library Journal

John Lewis Gaddis, Distinguished Professor of History at Ohio University, is the author of The United States and the Origins of the Cold War and Strategies of Containment: A Critical Appraisal of Postwar American National Security Policy.

GOR004514122
The Long Peace: Inquiries into the History of the Cold War by John Lewis Gaddis (Professor of History, Ohio University)
John Lewis Gaddis (Professor of History, Ohio University)
Used - Very Good
Paperback
Oxford University Press Inc
1989-02-02
344
0195043359
9780195043358
N/A
Book picture is for illustrative purposes only, actual binding, cover or edition may vary.
This is a used book - there is no escaping the fact it has been read by someone else and it will show signs of wear and previous use. Overall we expect it to be in very good condition, but if you are not entirely satisfied please get in touch with us.