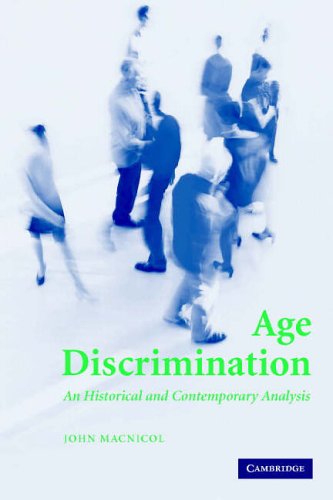 Used Price
$49.99
inc. GST
Free Shipping in Australia
This book examines the age discrimination debate in Britain and the USA, tracing its history back to the 1930s. It offers a unique interdisciplinary analysis, backed up by detailed scholarly research, and will be of interest to those working in gerontology, social policy, social history, sociology and politics.
Reviews:
Trustpilot
Very Good

Age discrimination is a highly topical issue in all industrialised societies, against a background of concerns about shortening working lives and ageing populations in the future. Based upon detailed research, and adopting an interdisciplinary approach, this unique study traces the history of the age discrimination debate in Britain and the USA since the 1930s. It critically analyses the concepts of ageism in social relations and age discrimination in employment. Case-studies on generational equity and health care rationing by age are followed by an analysis of the British government's initiatives against age discrimination in employment. The book then traces the history of the debate on health status and old age, addressing the question of whether working capacity has improved sufficiently to justify calls to delay retirement and extend working lives. It concludes with a detailed examination of the origins and subsequent working of the USA's 1967 Age Discrimination in Employment Act.

'The great virtue of John Macnicol's book is precisely that it forces the reader to question many of the assumptions that are often made in the debate about ageism, mandatory retirement and what the appropriate pensionable age should be ... otherwise a book marked by wide-ranging scholarship and careful analysis.' Journal of Public Policy
'It merits wide reading by policy analysts, activists and gerontologists on both sides of the Atlantic.' History

About John Macnicol (London School of Economics and Political Science)

John Macnicol is Visiting Professor in Social Policy at the London School of Economics. He has published extensively on current social policy and the history of social policy, including The Politics of Retirement in Britain, 1878-1948 (Cambridge University Press, 1998).

GOR003011738
Age Discrimination: An Historical and Contemporary Analysis by John Macnicol (London School of Economics and Political Science)
John Macnicol (London School of Economics and Political Science)
Used - Very Good
Paperback
Cambridge University Press
2006-01-12
316
0521612608
9780521612609
Winner of Best New Publication, 2006-7, Social Policy Association.
Book picture is for illustrative purposes only, actual binding, cover or edition may vary.
This is a used book - there is no escaping the fact it has been read by someone else and it will show signs of wear and previous use. Overall we expect it to be in very good condition, but if you are not entirely satisfied please get in touch with us.