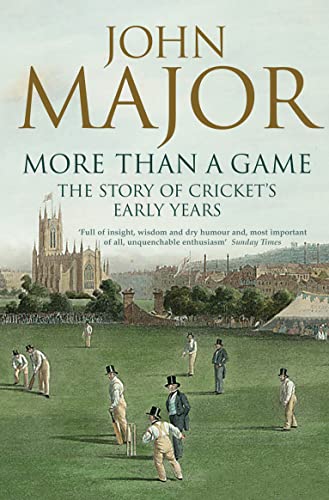 More Than A Game
by John Major

The former Prime Minister examines the history of one of the great loves of his life.

More Than A Game Summary

More Than A Game: The Story of Cricket's Early Years by John Major

The former Prime Minister examines the history of one of the great loves of his life.

Throughout John Major's life, one of the constant factors has been his deep love of cricket. In this sumptuously illustrated book he delves deep into the game's history, tracing its development from its rustic beginnings to the international sport we know today. Along the way he examines - and at times demolishes - many cherished myths. Among the subjects to which he pays particular attention are the changing social role of cricket, developments in the rules, the emergence of the professional player, the game's spread throughout the British Empire and the part it has played in cementing international relations.

John Major's history of cricket reflects not only his lifelong passion for the game, but the depth of his research among a wealth of hitherto neglected but fascinating sources. It is a significant addition to the already rich literature of the greatest game of all.

More Than A Game Reviews

'Expertly compiled and beautifully produced...it's a book full of insight, wisdom and dry humour and, most important of all, unquenchable enthusiasm which will be appreciated by everyone who shares it.' Sunday Times

'I cannot imagine a better guide - authoritative, graceful and always with an eye to bringing out the quirky characters who have made cricket "more than a game"...(Major's) fascination with human behaviour makes lively reading...as a readable and likeable historian of what he loves, he takes some beating. He knows the beauty of the game and makes it live.' Daily Mail

'A thoroughly accessible history of cricket...the author's passion for a sport has resulted in a volume that could become the definitive account of cricket's early years.' Waterstones Books Quarterly

'Major's richly detailed history of the game interleaves anecdotes of test match results being passed round cabinet meetings with stories of the game's early patrons.' Observer

'It's a spectacular achievement. I can't think of anyone else who could have given such an authoritative inner and overview of the game and have the ability and knowledge to put it in the context of cultural, commercial, historical and social happenings at the same time. But more than that, it is a personal book and, even with the extraordinary amount of information, thoroughly readable...a startlingly good book. John has done a marvellous job, and I think, for the first time ever, we have both the reasonably well-known and the unknown facts about cricket put in a social and historical context and in a readable and concise fashion.' David Rayvern Allen

John Major was leader of the Conservative Party and Prime Minister from 1990 to 1997. He is the President of Surrey County Cricket Club.

GOR000911177
More Than A Game: The Story of Cricket's Early Years by John Major
John Major
Used - Very Good
Paperback
HarperCollins Publishers
2008-04-01
400
0007183658
9780007183654
Winner of British Sports Book Awards: Best Cricket Book 2008
Book picture is for illustrative purposes only, actual binding, cover or edition may vary.
This is a used book - there is no escaping the fact it has been read by someone else and it will show signs of wear and previous use. Overall we expect it to be in very good condition, but if you are not entirely satisfied please get in touch with us.