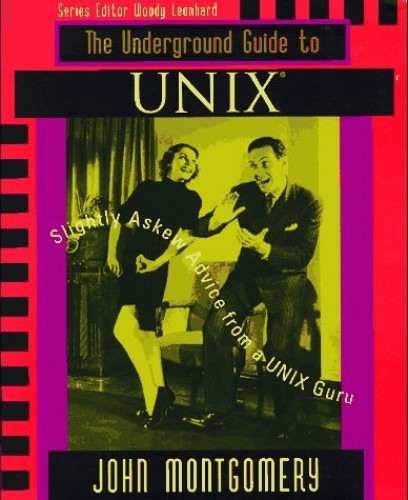 Out of Stock
$49.99
inc. GST
This irreverent book gives straighforward advice on the best way to perform tasks in the UNIX environment. Regardless of the UNIX version used by the reader, it unlocks the mysteries of the file system and covers the essentials for exploiting the power of the UNIX operating system.
Good
Only 0 left

Read a review of The Underground Guide to UNIX that appeared in the August issue of BYTE. It's no coincidence that UNIXA (R) is a four-letter word--the "problem child" of operating systems is notoriously arcane and inscrutable. In The Underground Guide to UNIX, scrutability expert John Montgomery takes you on an emotional roller coaster ride through the vagaries of this hard-to-master yet incomprehensible operating system. You'll find serious information on getting the most out of the parts of UNIX you use every day, and detailed advice on working better and faster, whatever flavor of UNIX you're stuck wit...uh, prefer. You'll laugh, you'll cry, you'll buy multiple copies for all your friends. Learn how to: *master the most popular UNIX text editors: vi, emacs, ex, and sed *use and abuse basic UNIX security--hide potentially incriminating files like love.letter or resume.doc, or search your boss's files for your name and key words like "problem employee" *access the Internet and use ftp, telnet, gopher, and Mosaic to get completely frivolous information from almost anywhere in the world *program the shells (C, Korn, and Bourne) to do whatever the heck you want *and oh so much more! Every page has something you can use immediately. This book is packed wall to wall with advice, warnings, tips, bug reports, workarounds, and the kind of nitty-gritty explanations that could only come from someone who eats, sleeps, and breathes UNIX. Series Editor Woody Leonhard and Addison-Wesley are proud to bring you the Underground Guides--serious fun for power users. 0201406535B04062001

John Montgomery is Features Editor at Byte magazine and the author of The Underground Guide to UNIX (R) (Addison-Wesley, 1995), and the proud owner of a brown house somewhere in California.

John Montgomery is the author of The Underground Guide to UNIX (R) and Troubleshooting Your Multimedia PC. He is CIO of Imagine, Inc.

GOR001849669
Underground Guide to UNIX (TM): Slightly Askew Advice from a UNIX? Guru by John Montgomery
John Montgomery
Used - Good
Hardback
Pearson Education (US)
1995-01-12
368
0201406535
9780201406535
N/A
Book picture is for illustrative purposes only, actual binding, cover or edition may vary.
This is a used book - there is no escaping the fact it has been read by someone else and it will show signs of wear and previous use. Overall we expect it to be in very good condition, but if you are not entirely satisfied please get in touch with us.