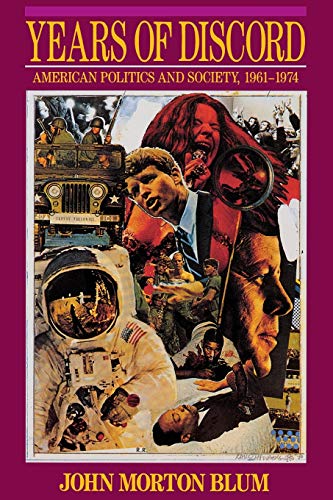 In Stock
$15.49
+10% GST
"A vivid and masterful account of the terrible discord and violence of those years."-C. Vann Woodward
Very Good
Only 2 left

For fifteen tense and troubled years between the election of John F. Kennedy in 1960 and the resignation of Richard Nixon in 1974, the United States struggled to direct its domestic life and its role in a rapidly changing world.

These fifteen years are as rich as any in American history, rich in incident - the Bay of Pigs, the Cuban Missile Crisis, the civil rights struggle, the antiwar crusade, the opening of China, Watergate, Kennedy's assassination, Johnson's retirement, the fall of Nixon: rich in personality - Robert Kennedy, Stokely Carmichael, Martin Luther King, Jr, Earl Warren, Bob Dylan, Henry Kissinger, George Wallace, Hubert Humphrey: and rich, finally in what it tells us of power, its attainment, and its use at home and abroad.

"Once again, John Morton Blum has brought to life a critical period of American history. An illuminating account of the amazing Sixties, and an invaluable contribution to the history of our times." -- Robert G. Kaiser - Washington Post
"In this incisive, judicious and eminently readable book, a master historian tels the story of those tangled and turbulent years just behind us-years that shook and remolded the republic." -- Arthur Schlesinger Jr.

John Morton Blum is the author of many highly regarded books on American political history, including The Republican Roosevelt, V Was for Victory, and Years of Discord. He is a Sterling Professor Emeritus of History at Yale University.

GOR001671204
Years of Discord: American Politics and Society, 1961-1974 by John Morton Blum
John Morton Blum
Used - Very Good
Paperback
WW Norton & Co
1992-08-17
544
039330910X
9780393309102
N/A
Book picture is for illustrative purposes only, actual binding, cover or edition may vary.
This is a used book - there is no escaping the fact it has been read by someone else and it will show signs of wear and previous use. Overall we expect it to be in very good condition, but if you are not entirely satisfied please get in touch with us.