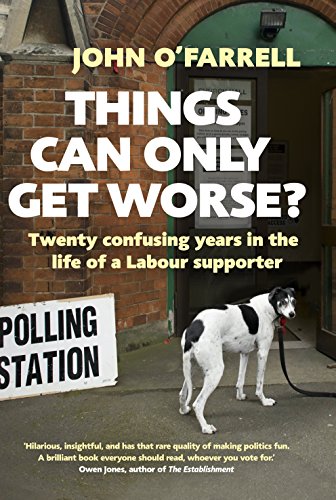 Things Can Only Get Worse?
by John O'Farrell

In Stock
$14.49
+10% GST
Tells the personal story of one political activist helping Labour progress from its 1997 landslide to the unassailable position it enjoys today. A sequel to the best-selling Things Can Only Get Better, this book is suitable for everyone who could use a good laugh after Brexit, Boris and Trump.
Very Good
Only 4 left

Things Can Only Get Worse? Summary

Things Can Only Get Worse?: Twenty confusing years in the life of a Labour supporter by John O'Farrell

'Hilarious, insightful and has that rare quality of making politics fun. A brilliant book everyone should read, whoever you vote for.' Owen Jones, author of The Establishment From the giddy heights of New Labour's landslide victory in 1997 to the shock result of the 2017 snap election, these are the frank and funny memoirs of one bewildered Labour activist who tried to carry on as usual long after politics had stopped making sense. With a literary flair that has been compared to Donald Trump's tweets, John O'Farrell attempts to explain the alarming rise of populist politics, Labour's twenty-year identity crisis, and why you should never tell your mother you are doing a radio phone-in, unless you want her ringing up to tell everyone she agrees with you. On everything. Along the way, John stood for parliament against Theresa May but failed to step into her shoes; he took his campaigning skills to America (but still Obama got in); and he was dubbed 'the sickest man in politics' by the Daily Mail when in truth he's only the second or third. The long-awaited sequel to the best-selling Things Can Only Get Better is for everyone who could use a good laugh after Brexit, Trump and learning you were governed by the DUP. A twenty-year journey from hope to despair and back again, packed with political confessions even more outrageous that running through fields of wheat.

Things Can Only Get Worse? Reviews

"Hilarious, insightful and has that rare quality of making politics fun. A brilliant book everyone should read, whoever you vote for." -- Owen Jones, author of The Establishment
"Even Conservatives will like this" -- Roland White * The Sunday Times *
"Reading this book is like reliving the last twenty years as a Labour supporter. John O'Farrell has, in his own unique and hilarious way, captured the highs and lows, pride and embarrassment, joy and frustration of being Labour." -- Sadiq Khan, Mayor of London
"O'Farrell hasn't lost his touch. There are laughs as well as large doses of common sense." -- Chris Mullin * Guardian *
"John O'Farrell couldn't be unfunny if he tried but this book is even better than his famous take on Labour's 18 years in opposition. Hilarious and insightful in equal measure this is vintage stuff from Maidenhead's finest political brain." -- Alan Johnson

John O'Farrell's first book was a bestselling memoir, Things Can Only Get Better. Since then he has published five novels: The Man Who Forgot His Wife, May Contain Nuts, This Is Your Life, The Best a Man Can Get and most recently There's Only Two David Beckhams. He has also written two best-selling history books: An Utterly Impartial History of Britain and An Utterly Exasperated History of Modern Britain, as well as three collections of journalism from his Guardian columns. His books have been translated into over twenty-five languages and have been adapted for radio and television. A former comedy scriptwriter for such productions as Spitting Image, Room 101, Have I Got News For You, Murder Most Horrid and Chicken Run, he is founder of the UK's first daily news satire website NewsBiscuit and more recently co-wrote the Broadway musical Something Rotten!

GOR008783139
Things Can Only Get Worse?: Twenty confusing years in the life of a Labour supporter by John O'Farrell
John O'Farrell
Used - Very Good
Paperback
Transworld Publishers Ltd
2017-06-15
320
0857525336
9780857525338
N/A
Book picture is for illustrative purposes only, actual binding, cover or edition may vary.
This is a used book - there is no escaping the fact it has been read by someone else and it will show signs of wear and previous use. Overall we expect it to be in very good condition, but if you are not entirely satisfied please get in touch with us.