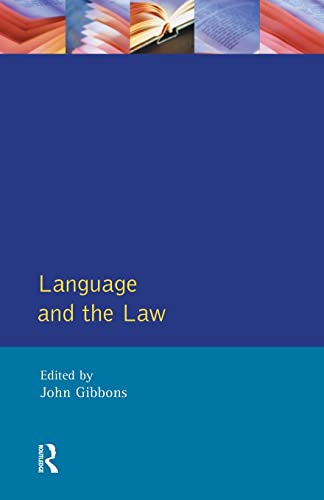 Language and the Law
by John Peter Gibbons

In Stock
$11.49
+10% GST
Examines three main areas where the language and law interact: the central issue of the language of the law; the disadvantage which language can impose before the law, and forensic linguistics. Each area is dealt with in a separate section which is preceded by an introduction from the editor.
Very Good
Only 1 left

Language and the Law Summary

Language and the Law by John Peter Gibbons

Explains and describes the ways that language use in the legal system can create inequality and disadvantage. It examines the three main areas where the two intersect: the central issue of the language of the law; the disadvantage which language can impose before the law, and forensic linguistics - the use of linguistic evidence in legal processes.

Each section of the book is preceded by an introduction by the editor which sets the paper within a conceptual framework. Lawyer's opinions are not neglected even though the collection is written mainly by linguists. The section concludes with a lawyer's response, in which a prominent lawyer with a particular interest in the content of the section responds to the papers.

Language and the Law Reviews

"xxx;this is an important book and one that every linguist concerned about language and the law will want to read."

GOR001978343
Language and the Law by John Peter Gibbons
John Peter Gibbons
Language In Social Life
Used - Very Good
Paperback
Taylor & Francis Ltd
1994-07-18
490
058210145X
9780582101456
N/A
Book picture is for illustrative purposes only, actual binding, cover or edition may vary.
This is a used book - there is no escaping the fact it has been read by someone else and it will show signs of wear and previous use. Overall we expect it to be in very good condition, but if you are not entirely satisfied please get in touch with us.