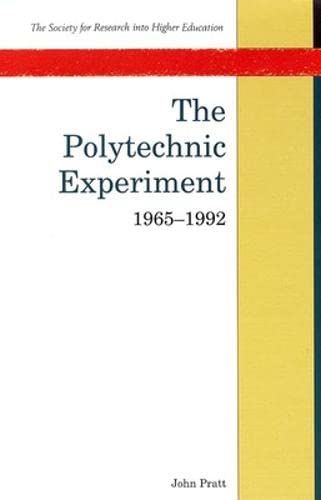 The Polytechnic Experiment
by John Pratt

In Stock
$36.99
+10% GST
This is a history of the polytechnics, created in 1965 and finally absorbed into the university system in 1992. The author analyzes the polytechnic's aims and achievements, and explores the lessons for future higher education policy.
Very Good
Only 1 left

The Polytechnic Experiment by John Pratt

In 1965, the British government astonished the academic world by announcing that it proposed to create a sector of higher education different from but equal in status to the traditional universities. Thirty polytechnics were formed over the next few years from existing technical colleges and other institutions in England and Wales to head this new sector. In 1992, the then thirty-four polytechnics and other major colleges acquired university titles, and the polytechnic experiment can be seen as coming to an end. The development of the polytechnics was always controversial and a topic of interest in both Britain and other countries. Until now there has been no complete account of the polytechnic 'experiment'. This book attempts to compile a full record of the changing policy aims, the nature of the students and staff in the polytechnics, the distinctive courses they developed and the ways in which they were governed and funded. It asks how far did the polytechnics fulfil the aims set for them in the 1960s and what are the lessons for the future of higher education both in Britain and other countries with plural systems.

* The first full history of the polytechnics

* An analysis of the polytechnics' aims and achievements

* An exploration of the lessons for future higher education policy

This is essential reading for senior managers in all forms of post-school education and for students and scholars of higher education policy.

"It is an essential work of reference and justifies its price." - TES "...offers revealing perspectiveson the past, and significant pointers to the future." - Education + Training "Those who have hacked their way through the tangled undergrowth of official statistics about British HE, will wonder and give thanks that so much has been brought together so authoritatively." - Lifelong Learning in Europe "...will be an invaluable contribution to the adult educationarchive." - Adults Learning "An essential work of reference." - The Lecturer "...stronglyrecommended to anyone interested in the development of mass higher education in Britain." - Higher Education Review "...provides a worthwhile analysis of one of the most important innovations in postwar British higher education." - InternationalHigher Education "...stimulates powerful reflection, something to be recommended to policy makers as new developments such as the growth of HE in FE, amalgamations of institutions and individual learning accounts creep up the charts of this Learning Age." - Studies in the Education of Adults

GOR010100008
The Polytechnic Experiment by John Pratt
John Pratt
Used - Very Good
Hardback
Open University Press
1997-05-01
256
0335195644
9780335195640
N/A
Book picture is for illustrative purposes only, actual binding, cover or edition may vary.
This is a used book - there is no escaping the fact it has been read by someone else and it will show signs of wear and previous use. Overall we expect it to be in very good condition, but if you are not entirely satisfied please get in touch with us.