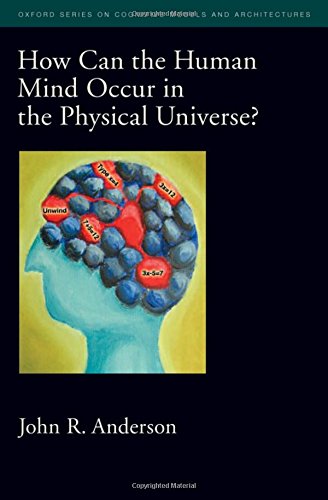 How Can the Human Mind Occur in the Physical Universe?
by John R. Anderson

Out of Stock
$102.99
inc. GST
The human cognitive architecture consists of a set of largely independent modules associated with different brain regions. This book discusses in detail how these various modules can combine to produce behaviours as varied as driving a car and solving an algebraic equation.
Very Good
Only 0 left

How Can the Human Mind Occur in the Physical Universe? Summary

How Can the Human Mind Occur in the Physical Universe? by John R. Anderson

"The question for me is how can the human mind occur in the physical universe? We now know that the world is governed by physics. We now understand the way biology nestles comfortably within that. The issue is how will the mind do that as well?" Alan Newell, 4 December 1991, Carnegie Mellon University The argument John Anderson gives in this book was inspired by the passage above, from the last lecture by one of the pioneers of cognitive science. Alan Newell describes what, for him, is the pivotal question of scientific inquiry, and Anderson gives an answer that is emerging from the study of brain and behaviour. Humans share the same basic cognitive architecture with all primates, but they have evolved abilities to exercise abstract control over cognition and process more complex relational patterns. The human cognitive architecture consists of a set of largely independent modules associated with different brain regions. This book discusses in detail how these various modules can combine to produce behaviors as varied as driving a car and solving an algebraic equation, but focuses principally on two of the modules: the declarative and procedural. The declarative module involves a memory system that, moment by moment, attempts to give each person the most appropriate possible window into his or her past. The procedural module involves a central system that strives to develop a set of productions that will enable the most adaptive response from any state of the modules. Newell argued that the answer to his question must take the form of a cognitive architecture, and Anderson organizes his answer around the ACT-R architecture, but broadens it by bringing in research from all areas of cognitive science, including how recent work in brain imaging maps onto the cognitive architecture.

How Can the Human Mind Occur in the Physical Universe? Reviews

An eloquent, personal and closely argued book, that synthesizes decades of Anderson's ground-breaking work, integrates that work with the latest advances from brain imaging, and provides inspiration and direction for the future of cognitive science. This book puts cognitive architecture back at the heart of the subject, and provides a rich and coherent account of the computational machine that is the human brain. * Nick Chater, University College London, UK *
In this ground-breaking book, John Anderson brings together research on computational models of the mind and research on the operation of the brain. The book also provides the best description of the latest version of ACT, which is a significant extension in functionality and theory from its predecessors. The book is a must read for researchers and students in Cognitive Science. * John E. Laird, University of Michigan, USA *
In 2006 John Anderson received the world's major award in cognitive science, the Heineken Prize, for his groundbreaking theory on human cognition. His new book represents a courageous effort to further develop that theory; ambitious in its attempt to develop a coherent, general theory of human cognition of all of its physical, computational, and neuroscientific detail. It seems to me that the advanced tools of the present theory can, with great profit, be applied in meeting an ultimate challenge: explaining the role of language in human cognition. * Willem J. M. Levelt, Max Planck Institute for Psycholinguistics, Germany *
The mission of cognitive neuroscience is (or at least should be) to connect cognition with neural function, to explain how gray matter gives rise to the psychology of thought. Where many people settle for a mere geography - an inventory of what happens where - Anderson aims for something much more ambitious: an understanding of how cognition happens at all. By combining trenchant psychological analysis with well-motivated neuroimaging, Anderson provides a new paradigm for addressing the core questions in cognitive neuroscience. An important step in the science of relating mind and brain. * Gary Marcus, Infant Language Center, New York University, USA *

John R. Anderson is the R. K. Mellon University Professor of Psychology and Computer Science at Carnegie Mellon University. He has led the development of the ACT-R cognitive architecture and its applications, especially intelligent tutoring systems. Anderson has been recognized as a leader in the field of cognitive science by a number of awards, including the American Psychological Association's Distinguished Scientific Career Award, the David E. Rumelhart Prize for Contributions to the Formal Analysis of Human Cognition, the Howard Crosby Warren Medal for outstanding achievement in Experimental Psychology, and the Dr. A.H. Heineken Prize for Cognitive Science. He has been elected to the National Academy of Sciences and the American Academy of Arts and Sciences and is a past president of the Cognitive Science Society.

1. Cognitive Architecture ; 2. The Modular Organization of the Mind ; 3. Human Associative Memory ; 4. The Adaptive Control of Thought ; 5. What Does It Take to Be Human? Lessons From High School Algebra ; 6. How Can the Human Mind Occur?

GOR010401871
How Can the Human Mind Occur in the Physical Universe? by John R. Anderson
John R. Anderson
Oxford Series on Cognitive Models and Architectures
Used - Very Good
Hardback
Oxford University Press Inc
2007-07-12
304
0195324250
9780195324259
N/A
Book picture is for illustrative purposes only, actual binding, cover or edition may vary.
This is a used book - there is no escaping the fact it has been read by someone else and it will show signs of wear and previous use. Overall we expect it to be in very good condition, but if you are not entirely satisfied please get in touch with us.