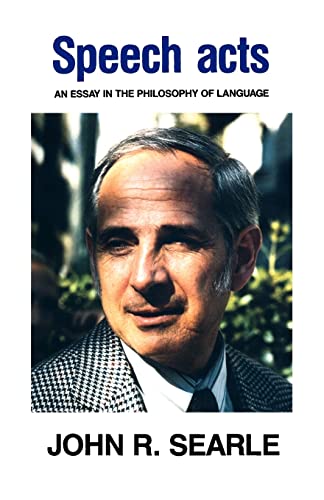 In Stock
$18.49
+10% GST
Written in an outstandingly clear and lively style, this 1969 book provokes its readers to rethink issues they may have regarded as long since settled.
Well Read
Only 1 left

Speech Acts: An Essay in the Philosophy of Language by John R. Searle

Written in an outstandingly clear and lively style, this 1969 book provokes its readers to rethink issues they may have regarded as long since settled.

'This small but tightly packed volume is easily the most substantial discussion of speech acts since John Austin's How to do things with words and one of the most important contributions to the philosophy of language in recent decades.' The Philosophical Quarterly
'This book has immediately, and justly, been accorded the status of a major contribution to the philosophy of language. The brilliant but programmatic insights of Austin's How to do things with words are systematically developed and integrated with the more recent work of philosophers such as Grice, Rawls and Searle himself to produce an apparently comprehensive and certainly illuminating general theory, summarized in what Searle terms the 'main hypothesis' of the book, 'speaking a language is engaging in a rule-governed form of behaviour.' Mind
'The main merit of Searle's book - and it is a very substantial merit indeed - is that by attempting to construct a systematic theory of speech acts it substantially advances out knowledge of the problems that have to be solved in this fascinating field. Even if Searle himself has not yet found a wholly satisfactory way through the jungle, he has certainly established a number of clearings which will greatly facilitate subsequent explorations.' Philosophical Review
'Written in an outstanding clear and lively style, it provokes its readers to rethink issues they may have regarded as long since settled.' The Times Literary Supplement

Part I. A Theory of Speech Acts: 1. Methods and scope; 2. Expressions, meaning and speech acts; 3. The structure of illocutionary acts; 4. Reference as a speech act; 5. Predication; Part II. Some Applications of the Theory: 6. Three fallacies in contemporary philosophy; 7. Problems of reference; 8. Deriving 'ought' from 'is'; Index.

GOR003233314
Speech Acts: An Essay in the Philosophy of Language by John R. Searle
John R. Searle
Used - Well Read
Paperback
Cambridge University Press
1969-01-02
214
052109626X
9780521096263
N/A
Book picture is for illustrative purposes only, actual binding, cover or edition may vary.
This is a used book. We do our best to provide good quality books for you to read, but there is no escaping the fact that it has been owned and read by someone else previously. Therefore it will show signs of wear and may be an ex library book.