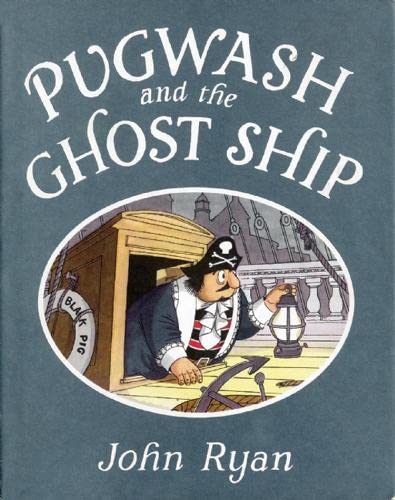 Pugwash and the Ghost Ship
by John Ryan

Captain Pugwash and his friends get caught up in a dastardly plot involving ghostly ghouls.

Pugwash and the Ghost Ship Summary

Pugwash and the Ghost Ship by John Ryan

The famous Black Pig, home to Captain Pugwash and his crew is in desperate need of a spring clean. But what begins as a simple exercise in painting and decorating soon leads to a plot so dastardly that it looks as if the Captain's days are numbered. Luckily, young Tom, the cabin boy, has a brainwave. And so Pugwash, the most famous pirate of all, survives yet again to sail the Seven Seas.

Pugwash and the Ghost Ship Reviews

The stories are wonderfully told: simple, clear language that stays on course... and of course the illustrations are so enduringly distinctive, with Pugwash of the late Pavarotti-like proportions. Book Magazine

John Ryan was born in Edinburgh and spent his early childhood in the UK and Morocco before moving back to England, where he worked for seven years as Assistant Art Master of Harrow School. Captain Pugwash first set sail over 50 years ago as a strip cartoon. Since then he has featured in books, films and theatres all over the world. Before his death in 2009 aged 88, John lived in Rye, Sussex, the home of smugglers in years gone by, with his wife Priscilla, who is also an artist. He has three children and a regular crew of grandchildren.

GOR005257847
Pugwash and the Ghost Ship by John Ryan
John Ryan
Used - Very Good
Hardback
Frances Lincoln Publishers Ltd
2007-09-27
32
1845078233
9781845078232
N/A
Book picture is for illustrative purposes only, actual binding, cover or edition may vary.
This is a used book - there is no escaping the fact it has been read by someone else and it will show signs of wear and previous use. Overall we expect it to be in very good condition, but if you are not entirely satisfied please get in touch with us.