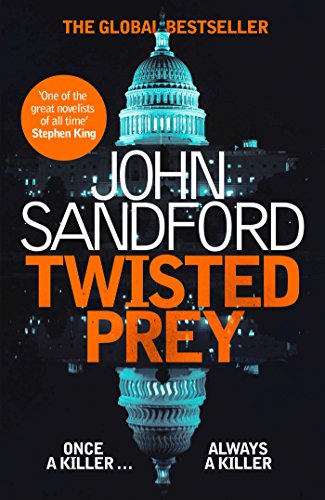 Lucas Davenport confronts an old nemesis, now a powerful U.S. senator, in the thrilling new novel in the #1 New York Times-bestselling Prey series. Find out why Stephen King calls John Sandford 'one of the great novelists of all time'!

Lucas Davenport had crossed paths with her before.

A rich psychopath, Taryn Grant had run successfully for the U.S. Senate, where Lucas had predicted she'd fit right in. He was also convinced that she'd been responsible for three murders, though he'd never been able to prove it. Once a psychopath had gotten that kind of rush, though, he or she often needed another fix, so he figured he might be seeing her again.

He was right. A federal marshal now, with a very wide scope of investigation, he's heard rumors that Grant has found her seat on the Senate intelligence committee, and the contacts she's made from it, to be very...useful. Pinning those rumors down was likely to be just as difficult as before, and considerably more dangerous.

But they had unfinished business, he and Grant. One way or the other, he was going to see it through to the end.

'The best Lucas Davenport story so far. The man has a fine touch for outlaws' Stephen King on Golden Prey

'Sandford's trademark blend of rough humor and deadly action keeps the pages turning until the smile-inducing wrap-up, which reveals the fates of a number of his quirky, memorable characters' Publishers Weekly on Golden Prey

'It appears there is no limit to John Sandford's ability to keep new breath and blood flowing into his Lucas Davenport series. This is a series you must be reading if you are not already' Bookreporter.com

'Sandford has always been at the top of any list of great mystery writers. His writing and the appeal of his lead character are as fresh as ever' The Huffington Post

Pulitzer prize-winning journalist John Sandford is the author of the Prey series, four Kidd novels and the Virgil Flowers series. He lives in Minnesota. Visit www.johnsandford.org for more information.

GOR009850132
Twisted Prey by John Sandford
John Sandford
Used - Like New
Paperback
Simon & Schuster Ltd
2019-04-18
400
1471174867
9781471174865
N/A
Book picture is for illustrative purposes only, actual binding, cover or edition may vary.
The book has been read, but looks new. The book cover has no visible wear, and the dust jacket is included if applicable. No missing or damaged pages, no tears, possible very minimal creasing, no underlining or highlighting of text, and no writing in the margins.