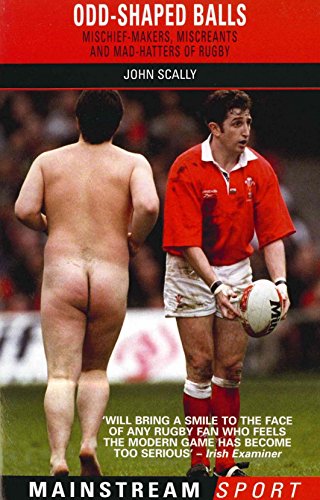 Used Price
$11.99
inc. GST
Free Shipping in Australia
It snoops inside sweaty, smelly dressing-rooms, reveals the passions of coaches and fans - without whom rugby would cease to exist - and delves deep into the sport's archives to recall its heroes, villains and victims, all of whom are part of the daily currency.
Reviews:
Trustpilot
Very Good Good

Rugby is not a game for those who think that centres are what you find in a box of Black Magic or who confuse Jonah Lomu with Joanna Lumley. At the same time, it is not a game for the bright: what kind of tortured mind would invent an oval ball? Of course, it helps if you know the rules and don't have any fear. In this respect you are in the same boat as most referees, particularly if you have a problem with your eyesight. Odd-Shaped Balls captures the humour, the agony and the ecstasy of one of the world's most popular sports. It snoops inside sweaty, smelly dressing-rooms, reveals the passions of coaches and fans - without whom rugby would cease to exist - and delves deep into the sport's archives to recall its heroes, villains and victims, all of whom are part of the daily currency. The book is no less than a who's who of the game, with both old and young getting the opportunity to have their say. Lining out is a cast of mischief-makers, miscreants and mad-hatters: from Max Boyce to Keith Wood; from Sean Fitzpatrick to Austin Healy; from Bill Beaumont and his streaker to Gavin Hastings; from Gareth Edwards to David Campese; and from the man in the scrum to the man at the bar. All exponents of surrealism, comic genius and savage wit, they offer a quirky insight into the sporting psyche as well as providing some riotous good laughs. With hundreds of funny stories, Odd-Shaped Balls is a light-hearted romp through decades of rugby tomfoolery that is guaranteed to put a smile on the face of all sports fans.

"'Will bring a smile to the face of any rugby fan who feels the modern game has become too serious' - Irish Examiner"
"'Easy to read . . . a perfect companion' - Rugby Times"
"'There's something of quality here for everyone' - Rugby World"
"'Entertaining' - Irish Independent"

John Scally is a lecturer at Trinity College in Dublin. A former journalist and broadcaster, he is the author of many books on sport, including Legends of Irish Rugby and Them and Us.

GOR001273881
Odd-Shaped Balls: Mischief-Makers, Miscreants and Mad-Hatters Of Rugby by John Scally
John Scally
Used - Very Good
Paperback
Transworld Publishers Ltd
2005-11-03
256
1845960416
9781845960414
N/A
Book picture is for illustrative purposes only, actual binding, cover or edition may vary.
This is a used book - there is no escaping the fact it has been read by someone else and it will show signs of wear and previous use. Overall we expect it to be in very good condition, but if you are not entirely satisfied please get in touch with us.