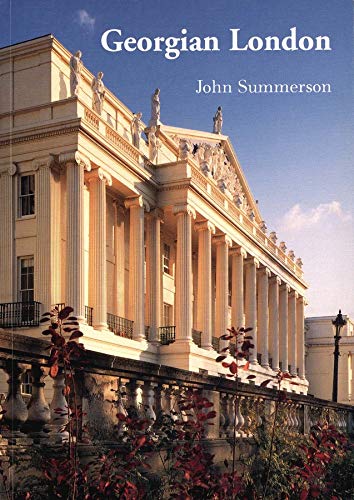 Out of Stock
$58.99
inc. GST
Encompassing the architecture of the capital from the Great Fire of 1666 through the city's early-19th-century expansion, this is a history of the genesis and development of Georgian London. It includes discussion of some of Britain's most important buildings and their architects.
Very Good
Only 0 left

In this classic of English architectural history (first published more than half a century ago), John Summerson provides a perceptive and highly readable account of a major building period in the history of London. Encompassing the architecture of the capital from the Great Fire of 1666 through the city's early nineteenth-century expansion, the book remains an indispensable guide to the genesis and development of Georgian London. Summerson examines the way in which building was conditioned by social, economic, and financial circumstances and discusses some of Britain's most important buildings and their architects.

While Summerson's text is essentially unchanged in this edition, it has been corrected in the light of new research, expanded to include a few significant buildings that were originally overlooked, and enhanced with new illustrations. The Appendix of surviving Georgian buildings has also been carefully updated.

Sir John Summerson (1904-1992) was the curator of Sir John Soane's Museum in London for almost forty years, simultaneously teaching the history of architecture at the Architectural Association in London and at Birkbeck College, University of London. His many books include Architecture in Britain 1530-1830 for the Pelican History of Art series and The Classical Language of Architecture. Sir Howard Colvin is Emeritus Fellow of St. John's College, Oxford University. His previous books include Essays in English Architectural History, A Biographical Dictionary of British Architects 1600-1840, Unbuilt Oxford, and Architecture and the After-Life, all published by Yale University Press.

GOR005357002
Georgian London by John Summerson
John Summerson
The Paul Mellon Centre for Studies in British Art
Used - Very Good
Paperback
Yale University Press
2003-06-03
446
0300089880
9780300089882
N/A
Book picture is for illustrative purposes only, actual binding, cover or edition may vary.
This is a used book - there is no escaping the fact it has been read by someone else and it will show signs of wear and previous use. Overall we expect it to be in very good condition, but if you are not entirely satisfied please get in touch with us.