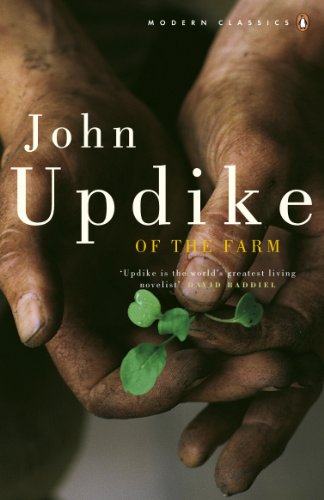 Of the Farm
by John Updike

Out of Stock
$30.99
inc. GST
Joey Robinson visits the farm where he grew up and where his mother now lives. Accompanied by his newly acquired second wife, Peggy, and an eleven-year-old stepson, Joey spends three days reassessing and evaluating the course his life has run. But for Joey and Peggy, the delicate balance of love and sex is threatened by a dangerous awareness.
Very Good
Only 0 left

Of the Farm Summary

Of the Farm by John Updike

Of the Farm recounts Joey Robinson's visit to the farm where he grew up and where his mother now lives alone. Accompanied by his newly acquired second wife, Peggy, and an eleven-year-old stepson, Joey spends three days reassessing and evaluating the course his life has run. But for Joey and Peggy, the delicate balance of love and sex is threatened by a dangerous new awareness.

Of the Farm Reviews

"Very clearly and very completely a small masterpiece.""--The New York Times ""AN EXCELLENT BOOK . . . A PSYCHOLOGICAL THRILLER . . . [Updike] has the painter's eye for form, line, and color; the poet's ear for metaphor; and the storyteller's knack for 'and then what happened?' "--"Harper's ""Updike is a master of sheer elegance of form that shows itself time and again.""--Los Angeles Times ""Updike just happens to write the most vivid prose in America.""--Vanity Fair"

GOR007148501
Of the Farm by John Updike
John Updike
Penguin Modern Classics
Used - Very Good
Paperback
Penguin Books Ltd
2007-08-30
144
0141189029
9780141189024
N/A
Book picture is for illustrative purposes only, actual binding, cover or edition may vary.
This is a used book - there is no escaping the fact it has been read by someone else and it will show signs of wear and previous use. Overall we expect it to be in very good condition, but if you are not entirely satisfied please get in touch with us.