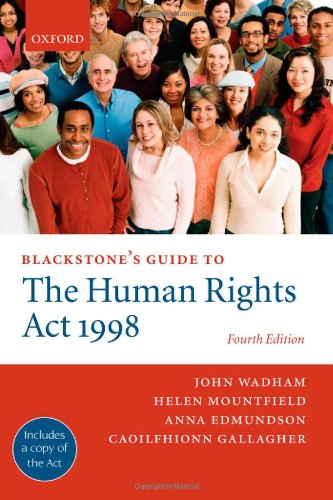 Blackstone's Guide to the Human Rights Act 1998
by John Wadham

Out of Stock
$17.49
inc. GST
Human rights law in the UK continues to evolve as a result of cases from both the domestic and Strasbourg Courts. Providing an explanation of how the Human Rights Act has been applied, this fourth edition summarises the interpretative techniques that lawyers need to understand and outlines the scope of the Convention articles.
Good
Only 0 left

Blackstone's Guide to the Human Rights Act 1998 by John Wadham

The Blackstone's Guides Series delivers concise and accessible books covering the latest legislation changes and amendments. Published within weeks of an Act, or soon after significant legislative change, they offer expert commentary by leading names on the effects, extent and scope of the legislation, plus a full copy of the Act or legislation itself. They offer a cost-effective solution to key information needs and are the perfect companion for any practitioner needing to get up to speed with the latest changes. Human rights law in the UK continues to evolve as a result of cases from both the domestic and Strasbourg Courts. The fourth edition of this bestselling text: - Analyses the impact of Convention rights in landmark judgments from areas such as constitutional law, discrimination law and criminal law - Explains how the UK courts are exercising their interpretative obligation to read legislation compatibly with Convention rights - Examines the notion of 'judicial deference' and how it has been applied in key cases - Maps the beginnings of a divergence in approach between the UK and Strasbourg Courts to human rights protection The new edition puts these recent developments in context and provides an up-to-date, clear, and concise, explanation of how the Human Rights Act has been applied. It summarises the interpretative techniques that lawyers need to understand, highlights the latest key domestic cases, and outlines the scope of the Convention articles. This fourth edition has been rewritten and restructured, with the addition of footnotes, to ensure even greater ease of use, and contains the full text of the Human Rights Act 1998 (as amended), the European Convention on Human Rights, and the EU Charter of Fundamental Rights.

John Wadham has extensive experience in privacy, regulatory, administrative, human rights and civil liberties law. Since 2003 he has been Deputy Chair of the Independent Police Complaints Commission (IPCC), and prior to this he was Director of Liberty. In addition to his practical experience as a solicitor, John has co-authored a number of titles in the areas of public law, human rights, and civil liberties, including; Blackstone's Guide to the Freedom of Information Act 2000 (OUP, 2nd edn Jan 2005 with Jonathan Griffiths); Blackstone's Guide to the Human Rights Act 1998 (OUP, 3rd edn Oct. 2003 with Helen Mountfield and Anna Edmundson); and the civil liberties section of The Penguin Guide to the Law.
Helen Mountfield (Call 1991) is a barrister at Matrix Chambers specialising in public law, particularly judicial review, and has a substantial practice in employment law, election law and information law. Issues of human rights, discrimination and EU law intersect across her whole practice.
Anna Edmundson is Deputy Director of the British Institute of Human Rights and was formerly Legal Information Manager at Matrix Chambers.

GOR005601865
Blackstone's Guide to the Human Rights Act 1998 by John Wadham
John Wadham
Blackstone's Guides
Used - Good
Paperback
Oxford University Press
2007-03-29
460
0199299579
9780199299577
N/A
Book picture is for illustrative purposes only, actual binding, cover or edition may vary.
This is a used book - there is no escaping the fact it has been read by someone else and it will show signs of wear and previous use. Overall we expect it to be in very good condition, but if you are not entirely satisfied please get in touch with us.