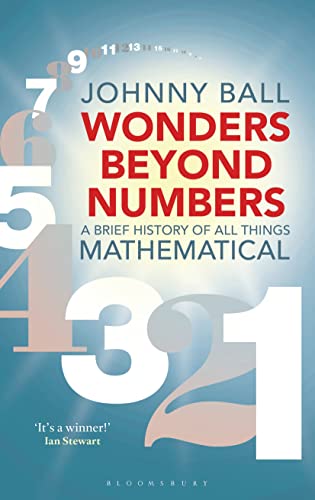 Wonders Beyond Numbers
by Johnny Ball

Wonders Beyond Numbers: A Brief History of All Things Mathematical by Johnny Ball

In this book, Johnny Ball tells one of the most important stories in world history - the story of mathematics. By introducing us to the major characters and leading us through many historical twists and turns, Johnny slowly unravels the tale of how humanity built up a knowledge and understanding of shapes, numbers and patterns from ancient times, a story that leads directly to the technological wonderland we live in today. As Galileo said, 'Everything in the universe is written in the language of mathematics', and Wonders Beyond Numbers is your guide to this language. Mathematics is only one part of this rich and varied tale; we meet many fascinating personalities along the way, such as a mathematician who everyone has heard of but who may not have existed; a Greek philosopher who made so many mistakes that many wanted his books destroyed; a mathematical artist who built the largest masonry dome on earth, which builders had previously declared impossible; a world-renowned painter who discovered mathematics and decided he could no longer stand the sight of a brush; and a philosopher who lost his head, but only after he had died. Enriched with tales of colourful personalities and remarkable discoveries, there is also plenty of mathematics for keen readers to get stuck into. Written in Johnny Ball's characteristically light-hearted and engaging style, this book is packed with historical insight and mathematical marvels; join Johnny and uncover the wonders found beyond the numbers.

The great strength of this book is probably its wide coverage of practical applications of mathematics, especially in engineering and architecture. * The Mathematical Gazette *
Johnny Ball's trademark enthusiasm for mathematics bubbles off every page. Clear, simple, readable, and informative - just as I expected. It's a winner! -- Ian Stewart, author of Significant Figures
I became an instant Johnny Ball fan when his TV series Think of a Number first aired in the UK, and I saw how he engaged and delighted my two young daughters in a way I, their maths professor dad, could not. With this new book, his passion for, and sheer enjoyment of, mathematics will surely entice yet more generations to the subject we both love. -- Keith Devlin, Stanford University mathematician, award-winning author and the 'Math Guy' on America's radio.
I always found maths intriguing and baffling in equal measure - and the latter triumphed. If only I'd had Wonders Beyond Numbers when growing up. But I now have it and it is a re-awaking into a world of delight and wonder. It is a wonderful book. -- Anthony Seldon, Vice-Chancellor of the University of Buckingham

Forty years ago, Johnny Ball wrote his first Think of a Number TV show, which opened the door to a whole new genre of programmes based on maths and science. He drew in audiences of all ages, and influenced a generation. While Johnny had no formal university experience in mathematics he made it his hobby, and after being a drummer, comedian, comedy writer and TV presenter, he turned this into a second career, one that continues to this day. Today he lectures on mathematics and science to readers, viewers and listeners of all levels and ages.

GOR010760064
Wonders Beyond Numbers: A Brief History of All Things Mathematical by Johnny Ball
Johnny Ball
Used - Very Good
Paperback
Bloomsbury Publishing PLC
2017-10-05
480
1472939980
9781472939982
N/A
Book picture is for illustrative purposes only, actual binding, cover or edition may vary.
This is a used book - there is no escaping the fact it has been read by someone else and it will show signs of wear and previous use. Overall we expect it to be in very good condition, but if you are not entirely satisfied please get in touch with us.