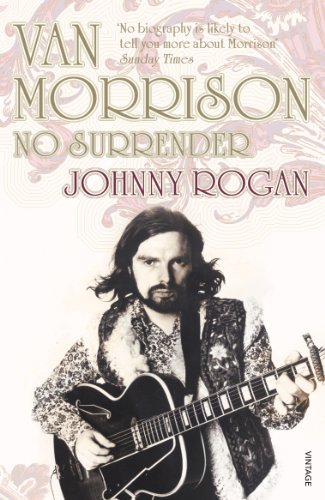 Out of Stock
$32.99
inc. GST
Reclusive, difficult and enigmatic, Van Morrison is a gifted singer-songwriter and an endlessly complicated man.
Very Good
Only 0 left

Reclusive, difficult and enigmatic, Van Morrison is a gifted singer-songwriter and an endlessly complicated man. In Van Morrison: No Surrender, Johnny Rogan has produced a provocative and revelatory biography of the musician, analysing the sense of place in his work and the tortuous journey that took him from local fame in Belfast to international success. Set against the cultural and political backdrop of Belfast, before, during and after the Troubles, No Surrender offers a unique and penetrating perspective on Morrison's long career and the times that made him. This paperback edition includes a new epilogue.

"'No biography is likely to tell you more about Morrison' - Adam Sweeting, Sunday Times"
"A compendium of detail, a neck-aching triumph of research" * Scotsman *
"Here is everything you wanted to know about Van Morrison... Rogan leaves no stone unturned" * Guardian *
"'Remarkably well-researched and deeply engrossing...Rogan's painstaking research yields an abundance of detail...Fascinating'" * Irish Times *
"'This characteristically accomplished biography shows the singer from every angle'" * Observer *

Johnny Rogan has been called 'pop's most eccentric biographer, a fanatical searcher after truth'. He is the author of sixteen books, including books on the Byrds, Roxy Music, the Kinks, the Smiths, Crosby, Stills, Nash and Young and John Lennon. His work has been acclaimed endlessly in print and on radio and television.

GOR001721216
Van Morrison: No Surrender by Johnny Rogan
Johnny Rogan
Used - Very Good
Paperback
Vintage Publishing
2006-05-04
672
0099431831
9780099431831
N/A
Book picture is for illustrative purposes only, actual binding, cover or edition may vary.
This is a used book - there is no escaping the fact it has been read by someone else and it will show signs of wear and previous use. Overall we expect it to be in very good condition, but if you are not entirely satisfied please get in touch with us.