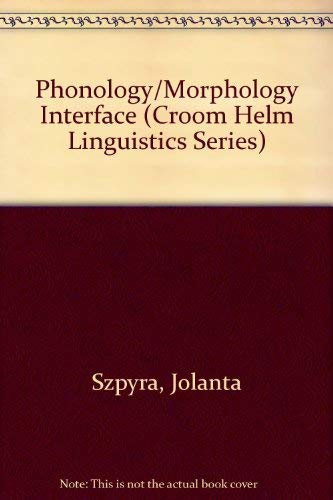 Knowledge and Power in Public Bureaucracies
by Jolanta Szpyra

Used Price
$110.99
inc. GST
Free Shipping in Australia
On the basis of Polish and English language material, Jolanta Szpyra examines the most important aspects of the phonology-morphology interaction, and suggests the best model with which to describe these phenomena.
Very Good

Knowledge and Power in Public Bureaucracies: From Pyramid to Circle by Jolanta Szpyra

Ever since Max Weber and Frederick Taylor, public organizations have been told that effective practice lies in maximizing rationality through science. Yet science-based management reforms have had only marginal impact on performance. People in entry-level positions posses knowledge from direct experience of the work, management knowledge is often science-based and distanced from the work, and appointed top executives struggle to join bureaucratic rationality with political exigencies. From Pyramid to Circle: Knowledge and Power in Public Bureaucracies offers fresh thinking about public organizations, arguing that conflicting forms of knowledge may be found within the bureaucratic pyramid.

Answering the question of why management reforms over the past century have failed on their own terms, this book examines the existence of conflicting forms of knowledge within public bureaucracies, how these contradictory perspectives interact (or fail to interact), and the ways in which these systems preserve managerial efforts to control workers. Authors Carnevale and Stivers argue that bureaucratic rationality is not the "one best way," as Taylor promised, and indeed, there is no one best way or model that can be deployed in all situations. The bureaucratic pyramid can, however, be made more effective by paying attention to circular processes that are widespread within the hierarchy, the authors argue, describing such circular processes as "facework." This book will serve as an ideal supplement to introductory public administration and organizational theory courses, as well as courses for mid-career professionals, helping to frame their work experiences.

David G. Carnevale is a professor emeritus from the University of Oklahoma. He is former international union director for AFSCME-AFL-CIO, operations administrator of the California State Employees Association, and executive director of the Maine State Employees Association. He is author of TrustworthSy Government: Leadership and Management Strategies for Building Trust and High Performance, and Organization Development in the Public Sector. Dr Carnevale is a practiced mediator and Vietnam veteran. Camilla Stivers spent two decades as a staff member in community-based publicly funded organizations. She taught public and non-profit administration at The Evergreen State College, Olympia, Washington, and the Levin College of Urban Affairs at Cleveland State University, where she held the Albert A. Levin chair in public service and urban studies. She is the author or co-author of six additional books. She is a fellow of the National Academy of Public Affairs and a former associate editor of Public Administration Review.

Preface Part I: Pyramids 1. The Failure of Management Reforms: A History 2. Knowing in the Public Organization: The Pyramid of Knowledges 3. What Workers Know-And How 4. The Manager's Hat 5. Executives at the Top: A Balancing Act Part II: An Illustration 6. The VA Case: Democratic Ideals and Bureaucratic Means Part III: Circles 7. From Pyramid to Circle: The Power of Facework 8. The Logic of Reasonableness: Experience, Judgment and Dialogue in Administrative Practice 9. The Dialogic Circle, Conflict Resolution and Collective Bargaining 10. Circles of Trust in Public Pyramids 11. Authentic Ethics in the Bureaucracy 12. Competing Knowledges and Public Service Education Reference List

GOR010380939
Knowledge and Power in Public Bureaucracies: From Pyramid to Circle by Jolanta Szpyra
Jolanta Szpyra
Used - Very Good
Hardback
Taylor & Francis Ltd
1989-04-06
240
0415003075
9780415003070
N/A
Book picture is for illustrative purposes only, actual binding, cover or edition may vary.
This is a used book - there is no escaping the fact it has been read by someone else and it will show signs of wear and previous use. Overall we expect it to be in very good condition, but if you are not entirely satisfied please get in touch with us.