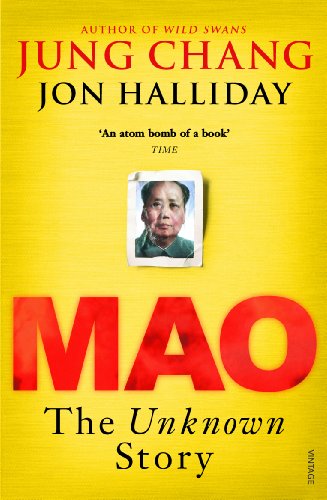 In Stock
$23.49
inc. GST
The most authoritative life of Mao ever written, by the bestselling author of Wild Swans, Jung Chang and her husband, historian Jon Halliday.
Like New Very Good Good Well Read
Only 1 left

The most authoritative life of Mao ever written, by the bestselling author of Wild Swans, Jung Chang and her husband, historian Jon Halliday. Based on a decade of research, and on interviews with many of Mao's close circle in China who have never talked before, and with virtually everyone outside China who had significant dealings with him, this is the most authoritative life of Mao ever written. It is full of startling revelations, exploding the myth of the Long March, and showing a completely unknown Mao: he was not driven by idealism or ideology; his intimate and intricate relationship with Stalin went back to the 1920s, ultimately bringing him to power; he welcomed Japanese occupation of much of China; and he schemed, poisoned and blackmailed to get his way. After Mao conquered China in 1949, his secret goal was to dominate the world. In chasing this dream he caused the deaths of 38 million people in the greatest famine in history. In all, well over 70 million Chinese perished under Mao's rule, in peacetime. Combining meticulous history with the story-telling style of Wild Swans, this biography makes immediate Mao's roller-coaster life, as he intrigued and fought every step of the way to force through his unpopular decisions. Mao's character and the enormity of his behaviour towards his wives, mistresses and children are unveiled for the first time. This is an entirely fresh look at Mao in both content and approach. It will astonish historians and the general reader alike. `This a bombshell of a book', Chris Patten, The Times `The first great political biography of the twenty-first century' Spectator

"The first great political biography of the twenty-first century" -- Frank Johnson * Spectator *
"This is a bombshell of a book... Jung Chang and Jon Halliday have done this extraordinary country a huge service with this book, which will one day be read as widely within China as it will deservedly be in the outside world" -- Chris Patten * The Times *
"Chang and Halliday cast new and revealing light on nearly every episode in Mao's tumultuous life... Magnificent... It is a stupendous work" -- Michael Yahuda * Guardian *
"Devastating... Awesome... Mesmerising... The most powerful, compelling and revealing political biography of modern times. Few books are destined to change history, but this one will" -- George Walden * Daily Mail *
"A triumph. It is a mesmerising portrait of tyranny, degeneracy, mass murder and promiscuity, a barrage of revisionist bombshells, and a superb piece of research. This is the first intimate, political biography of the greatest monster of them all" -- Simon Sebag Montefiore * Sunday Times *

Jung Chang was born in Yibin, Sichuan Province, China, in 1952. She was a Red Guard briefly at the age of fourteen and then worked as a peasant, a 'barefoot doctor', a steelworker and an electrician before becoming an English-language student and, later, an assistant lecturer at Sichuan University. She left China for Britain in 1978 and was subsequently awarded a scholarship by York University, where she obtained a PhD in Linguistics in 1982 - the first person from the People's Republic of China to receive a doctorate from a British university. Her award-winning book, Wild Swans, was published in 1991. Jon Halliday is a former Senior Visiting Research Fellow at King's College, University of London. He has written or edited eight previous books.

GOR008105676
Mao: The Unknown Story by Jon Halliday
Jon Halliday
Used - Like New
Paperback
Vintage Publishing
2007-01-04
992
0099507374
9780099507376
N/A
Book picture is for illustrative purposes only, actual binding, cover or edition may vary.
The book has been read, but looks new. The book cover has no visible wear, and the dust jacket is included if applicable. No missing or damaged pages, no tears, possible very minimal creasing, no underlining or highlighting of text, and no writing in the margins.