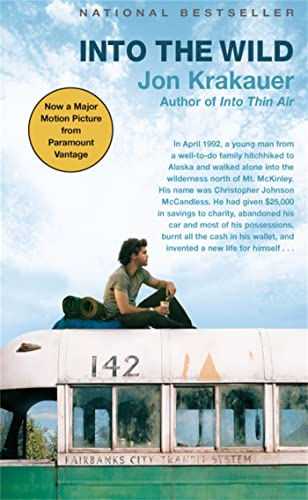 Into the Wild
by Jon Krakauer

In Stock
18,49 $
inc. GST
The film tie-in edition of Jon Krakauer's classic account of a gifted young man who chose literally to walk away from his life.
Very Good Good Well Read
5 in stock

Into the Wild Summary

Into the Wild by Jon Krakauer

Jon Krakauer's Into the Wild examines the true story of Chris McCandless, a young man, who in 1992 walked deep into the Alaskan wilderness and whose SOS note and emaciated corpse were found four months later, internationally bestselling author Jon Krakauer explores the obsession which leads some people to explore the outer limits of self, leave civilization behind and seek enlightenment through solitude and contact with nature.

A 2007 film adaptation of Into the Wild was directed by Sean Penn and starred Emile Hirsch and Kristen Stewart.

Into the Wild Reviews

Terrifying . . . Eloquent . . . A heart-rending drama of human yearning. * New York Times *
A narrative of arresting force. Anyone who ever fancied wandering off to face nature on its own harsh terms should give a look. It's gripping stuff. * Washington Post *
It may be nonfiction, but Into the Wild is a mystery of the highest order. * Entertainment Weekly *
An astonishingly gifted writer: his account of 'Alex Supertramp' is powerfully dramatic, eliciting sympathy for both the idealistic, anti-consumerist boy - and his parents. * Guardian *
A compelling tale of tragic idealism. * The Times *

Jon Krakauer is a mountaineer and the author of Eiger Dreams, Into the Wild, (which was on the New York Times bestseller list for over a year and was made into a film starring Emile Hirsch and Kristen Stewart) Into Thin Air, Iceland, Under the Banner of Heaven and Where Men Win Glory. He is also the editor of the Modern Library Exploration series.

GOR001376384
Into the Wild by Jon Krakauer
Jon Krakauer
Used - Very Good
Paperback
Pan Macmillan
2007-09-07
224
033045367X
9780330453677
N/A
Book picture is for illustrative purposes only, actual binding, cover or edition may vary.
This is a used book - there is no escaping the fact it has been read by someone else and it will show signs of wear and previous use. Overall we expect it to be in very good condition, but if you are not entirely satisfied please get in touch with us.