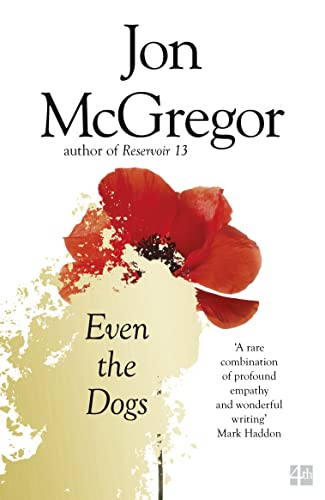 Even the Dogs
by Jon McGregor

WINNER OF THE 2012 IMPAC DUBLIN AWARD

Even the Dogs Summary

Even the Dogs by Jon McGregor

WINNER OF THE 2012 IMPAC DUBLIN AWARD

On a cold, quiet day between Christmas and the New Year, a man's body is found in an abandoned apartment. His friends look on, but they're dead, too. Their bodies found in squats and sheds and alleyways across the city. Victims of a bad batch of heroin, they're in the shadows, a chorus keeping vigil as the hours pass, paying their own particular homage as their friend's body is taken away, examined, investigated, and cremated.

All of their stories are laid out piece by broken piece through a series of fractured narratives. We meet Robert, the deceased, the only alcoholic in a sprawling group of junkies; Danny, just back from uncomfortable holidays with family, who discovers the body and futiley searches for his other friends to share the news of Robert's death; Laura, Robert's daughter, who stumbles into the junky's life when she moves in with her father after years apart; Heather, who has her own place for the first time since she was a teenager; Mike, the Falklands War vet; and all the others.

Theirs are stories of lives fallen through the cracks, hopes flaring and dying, love overwhelmed by a stronger need, and the havoc wrought by drugs, distress, and the disregard of the wider world. These invisible people live in a parallel reality, out of reach of basic creature comforts, like food and shelter. In their sudden deaths, it becomes clear, they are treated with more respect than they ever were in their short lives.

Intense, exhilarating, and shot through with hope and fury, Even the Dogs is an intimate exploration of life at the edges of society - littered with love, loss, despair, and a half-glimpse of redemption.

Customer Reviews - Even the Dogs

Even the Dogs Reviews

`A breathtakingly good writer' The Times

`Jon McGregor treads with unflinching respect through the debris of this dead man's home ... a short, brilliant and beautiful lesson in empathy' Daily Mail

`Set in a desolate urban winter landscape, this is a powerful portrait of homelessness, violence and despair on the fringes of society' Mail on Sunday

`A taut tale that packs an extraordinary emotional punch ... animated with such tenderness and empathy that it never becomes oppressive ... An important book' Daily Telegraph

`Astonishing ... Profound and humane ... McGregor has achieved many miracles in this book ... A brave, masterful novel' Irish Times

`It is a work of art as well as a subtle polemic, but above all his graceful, vivid prose conveys an eerie reality, existence as endured by the marginalised ... the narrative is cinematic, creating the illusion of a camera sweeping over the horrors ... Here is a brave, masterful novel that lives and weeps and, most emphatically, tells the stories behind those faces that no one seems to see' Eileen Batersby, Irish Times

`His reportorial absorption in the characters' world, with its restricted range of tone and incident, makes this powerful novel seem all the more resourcefully put together' Guardian

`Even the Dogs submerges the reader in the world of the marginalised and dispossessed, of begging, stealing, cheating for the next meal, the next bottle, the next fix ... A world we all know exists, but seldom touch' Scotland on Sunday

`McGregor has the ability to give voice to unexplored aspects of our everyday lives. Here, he serves up a compelling exploration of the lives of a loose community of drug addicts and down-and-outs' Sunday Times

Jon McGregor is the author of four novels and a story collection. He is the winner of the IMPAC Dublin Literature Prize, Betty Trask Prize, and Somerset Maugham Award, and has twice been longlisted for the Man Booker Prize. He is Professor of Creative Writing at the University of Nottingham, where he edits The Letters Page, a literary journal in letters. He was born in Bermuda in 1976, grew up in Norfolk, and now lives in Nottingham.

GOR008310837
Even the Dogs by Jon McGregor
Jon McGregor
Used - Like New
Paperback
HarperCollins Publishers
2017-02-09
208
0008218714
9780008218713
N/A
Book picture is for illustrative purposes only, actual binding, cover or edition may vary.
The book has been read, but looks new. The book cover has no visible wear, and the dust jacket is included if applicable. No missing or damaged pages, no tears, possible very minimal creasing, no underlining or highlighting of text, and no writing in the margins.