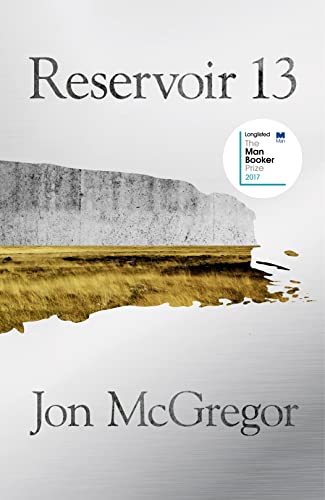 In Stock
$20.89
inc. GST
From the award-winning author of If Nobody Speaks of Remarkable Things and Even the Dogs. Reservoir 13 tells the story of many lives haunted by one family's loss. A GUARDIAN NOTABLE BOOK OF 2017
Like New Very Good
Only 1 left

Reservoir 13: WINNER OF THE 2017 COSTA NOVEL AWARD by Jon McGregor

WINNER OF THE 2017 COSTA NOVEL AWARD

From the award-winning author of If Nobody Speaks of Remarkable Things. Reservoir 13 tells the story of many lives haunted by one family's loss.

Midwinter in the early years of this century. A teenage girl on holiday has gone missing in the hills at the heart of England. The villagers are called up to join the search, fanning out across the moors as the police set up roadblocks and a crowd of news reporters descends on their usually quiet home.

The search for the missing girl goes on, but so does everyday life. As it must.

An extraordinary novel of cumulative power and grace, Reservoir 13 explores the rhythms of the natural world and the repeated human gift for violence, unfolding over thirteen years as the aftershocks of a stranger's tragedy refuse to subside.

`A rare and dazzling feat of art' George Saunders, author of Lincoln in the Bardo

`McGregor writes with such grace and precision, with love even, about who and where we are, that he leaves behind all other writers of his generation' Sarah Hall, author of The Wolf Border

`Reservoir 13 is quite extraordinary - the way it's structured, the way it rolls, the skill with which Jon McGregor lets the characters breathe and age' Roddy Doyle, author of Paddy Clarke Ha Ha Ha

`A wonderful book. He's an extraordinary writer, unlike anyone else' Paula Hawkins

`Absolutely magnificent; one of the most beautiful, affecting novels I've read in years. The prose is alive and ringing. There is so much space and life in every sentence. I don't know how he's done it. It's beautiful` Eimear McBride

`This is a book quite unlike anything I have read before. There's a hypnotic pull to the narrative, which has an irresistibly cumulative effect: in time I felt intimately immersed in a community traumatised by tragedy. Moreover McGregor writes with rare grace and integrity, and with such exquisite care the reader would be hard-pressed to find an infelicitous syllable, still less a word or phrase. If people were not already aware that here is one of our most accomplished living writers, they certainly will be now' Sarah Perry

`So beautifully written' Mail on Sunday

`If you don't yet know you should read novels by Jon McGregor, then I can't help you' Evie Wyld

`A work of intense, forensic noticing; an unobtrusively experimental, thickly atmospheric portrait of the life of a village which, for its mixture of truthfulness and potency, deserves to be set alongside works of such varied brilliance as Ronald Blythe's Akenfield, Jim Crace's Harvest and Dylan Thomas's Under Milk Wood' Sarah Crown, TLS

`McGregor's latest novel is a remarkable achievement... Fluid and fastidious, its sparing loveliness feels deeply true to its subject. There are moments, as in life, of miraculous grace, but no more than that...(a) humane and tender masterpiece' Irish Times

Jon McGregor is the author of four novels and a story collection. He is the winner of the IMPAC Dublin Literature Prize, Betty Trask Prize, and Somerset Maugham Award, and has been longlisted for the Man Booker Prize three times. He is Professor of Creative Writing at the University of Nottingham, where he edits The Letters Page, a literary journal in letters. He was born in Bermuda in 1976, grew up in Norfolk, and now lives in Nottingham.

GOR008304300
Reservoir 13: WINNER OF THE 2017 COSTA NOVEL AWARD by Jon McGregor
Jon McGregor
Used - Like New
Hardback
HarperCollins Publishers
2017-03-27
336
0008204853
9780008204853
N/A
Book picture is for illustrative purposes only, actual binding, cover or edition may vary.
This is a used book - there is no escaping the fact it has been read by someone else and it will show signs of wear and previous use. Overall we expect it to be in very good condition, but if you are not entirely satisfied please get in touch with us.