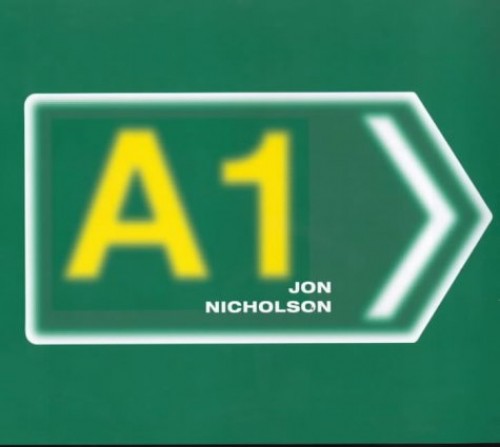 A1
by Jon Nicholson

Running the 400-odd miles between London and Edinburgh, the A1 is Britain's backbone. This book is a photographic portrait of life on the road.

A1: Portrait of a Road by Jon Nicholson

Running the 400-odd miles between London and Edinburgh, the A1 is Britain's backbone. This book is a photographic portrait of life on the road.

Jon Nicholson's mission is to find out what makes the people living and travelling along Britain's oldest and longest highway tick. Fuelled by a combination of petrol and all-day breakfasts, his journey takes him through a land of extremes, in both culture and terrain, from the genteel to the gritty and from the rolling to the rugged.

The text by acclaimed travel writer Nigel Richardson captures the road spot-on, and is the perfect introduction to Nicholson's pictures:

`It has yet to be eulogised in rock'n'roll songs or seminal novels, as has Route 66 in the USA. But, in its piecemeal and self-effacing way, our own A1 tells a unique story about Britain and how we see ourselves. As with a great river, the four-hundred-mile route from London to Edinburgh has its own lore and landscape. The fattest man in English history died on the road: Daniel Lambert weighed nearly fifty-three stones when he pegged out in the Wagon and Horses in Stamford in 1809. And thirty years ago, as I made my way to school, the driver of a speeding Ford Zodiac almost spread me across the broken white lines that marked the road between Doncaster and Bawtry...

`That close shave bred in me an initial fear of the A1 that modified into respect, and then fascination, as I grew up... When I saw Jon Nicholson's photographs, I realised we shared a vision of the A1.

`Nicholson had already completed a major photographic record of Route 66, that most iconic of highways that, in the words of the song, "winds from Chicago to LA, more than two thousand miles all the way." The A1 may be a more modest affair, but the challenge, photographically, was just as stiff. His intention with these pictures was "to see the familiar with a fresh eye; to reminisce, while acknowledging the march of progress."'

Jon Nicholson is a documentary photographer best known for his motorsport work, most notably with Damon Hill. His pictures have been in many publications around the world, including National Geographic and the Sunday Times magazine.

Writer and journalist Nigel Richardson is the author of Breakfast in Brighton and Dog Days in Soho. Since 1992 he has been on the staff of the Daily Telegraph. He lives in London and grew up just off the Great North Road in South Yorkshire.

GOR010800054
A1: Portrait of a Road by Jon Nicholson
Jon Nicholson
Used - Like New
Hardback
HarperCollins Publishers
2000-12-04
160
0002201992
9780002201995
N/A
Book picture is for illustrative purposes only, actual binding, cover or edition may vary.
The book has been read, but looks new. The book cover has no visible wear, and the dust jacket is included if applicable. No missing or damaged pages, no tears, possible very minimal creasing, no underlining or highlighting of text, and no writing in the margins.